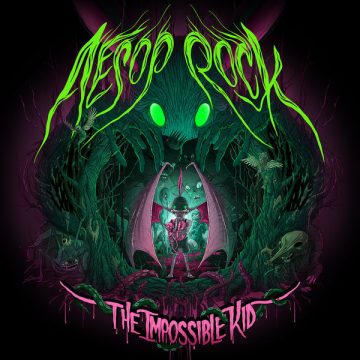 One of the most powerful things about hip-hop is it’s ability to present complex, dark, and deeply personal thoughts and feelings. In his latest album The Impossible Kid, rapper Aesop Rock, also known as Ian Matthias Bavitz, takes us on a tour of through his list of hang-ups, defeats, and demons in what can only be described as one of the most intense listening experiences that this talented artist has shared with us so far.

This deeply personal album doesn’t just showcase Bavitz’s unique penchant for wordplay, as well as a vocabulary which could make even the most seasoned writers jealous; it also takes the listener through a deeply personal narrative, almost stream-of-consciousness, which feels so raw and personal that it’s almost impossible not to relate to it in some way.

The album’s single, “Rings” discusses a love or art and a virtual arts career which Bavitz abandoned. He studied art professionally and shares the challenges faced by professional artists, stating: “Then it’s off to a school where it’s all that you do/ Being trained and observed by a capable few/ Back in New York, 5 peeps and a dog/ In a 2 bedroom doing menial jobs/ Plus, rhymin’ and stealin’ and being a clod/ Distractions free to maraud” and goes on to detail further regrets about allowing that side of his art to die while he pursued his music.

In “Blood Sandwich” Bravitz describes a scene of boys playing baseball in striking detail before admitting that the boys described in the song are his brothers, referred to with their “Tony Hawk hair”. He goes on to detail the struggles of growing up with parents who don’t understand, or are threatened by, their children’s musical tastes, stating: “It’s real youth in the palm of your hand/ When your mom thinks Satan is involved in a band” over retro-sounding synths.

Another reflective track is “Get Out of the Car” which describes Bravitz’s feelings of loss and grief over the death of his friend and colleague Camu Tao, who died of lung cancer in 2008. After stating “Ah, Watch the Impossible Kid / Everything that he touch turns promptly to shit / If I zoom on out I can finally admit / It’s all been a blur since Mu got sick” and describes having to leave town and take solace in the woods to clear his head and focus on his music.

With other exceptional tracks including “Rabies”, “Water Tower” and “Kirby” The Impossible Kid is an almost overwhelming listening experience because of the sheer power and magnitude of the emotion that Bravitz conveys through his words.

Even though Aesop Rock has been a mainstay in the rap scene for nearly 20 years, it’s clear that he still has a lot to say, and no shortage of catchy turns of phrase to express himself.

Alyson is a writer, content marketer and social media manager in Winnipeg, Manitoba. She holds a Bachelor of Arts in Rhetoric & Communications from the University of Winnipeg and runs her own business providing businesses and individuals with copyrighting services, and content marketing strategies and management. When not online she can be found gardening, riding her bike or sipping fancy coffee.
RELATED ARTICLES
aesop rockalbum reviewsrhymesayers entertainment
8.0

by Brian Capitao on January 18, 2019
Malibu Ken Malibu Ken Rhymesayers Entertainment As of 2016’s The Impossible Kid, it seems that Aesop Rock has been trying to make more accessible music. He and producer Tobacco, forming the [...]