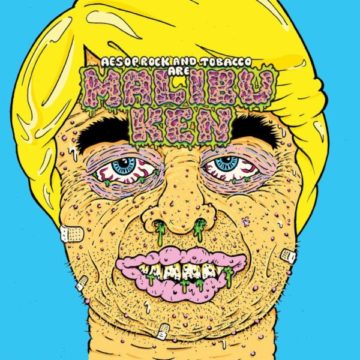 As of 2016’s The Impossible Kid, it seems that Aesop Rock has been trying to make more accessible music. He and producer Tobacco, forming the duo “Malibu Ken”, go back to the basics for this collaboration album.

Aesop Rock’s trademark humor is still intact. “Corn Maze” has the same feel as his classic work, while on “Tuesday” he details fungus and how life thrives more when left alone.

He revisits the story of Ricky Kasso on the song “Acid King” (he briefly mentioned him on “Catacomb Kings”), which was also the title of a 2018 book. Kasso epitomized the satanic panic of the 1980s that blamed heavy metal music for a spree of murders. Aesop Rock tells Kasso’s story point-by-point on the track.

Tobacco (of Black Moth Super Rainbow) stands out with his lo-fi and synth production, most impressive on the song “Sword Box”, which epitomizes an 8-bit style. Tobacco relies on his trademark synths for Aesop to plow through.

The album’s low-key feel makes it seem like an effortless attempt from Aesop Rock. Though neither as personal as The Impossible Kid nor as dense as Labor Days and None Shall Pass, Malibu Ken is still familiar territory for a rapper whose lyrics continue to befuddle audiences.

If you’re a fan of the Def Jux days, then you’ll like this one. While it’s not quite as psychedelic as the lead single “Acid King” or album art would have you believe, the production is quirky and Aesop Rock delivers solid raps.

Brian Capitao is a freelance writer and editor of https://deepfreezechillin.com. He has a passion for hip hop and hosts a podcast in Toronto called The Freeze, your weekly dose of hip hop chatter.
RELATED ARTICLES
aesop rockalbum reviewalbum reviews
10