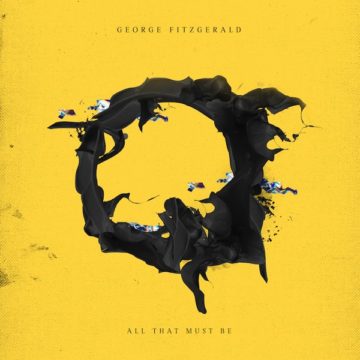 George FitzGerald
All That Must Be
Double Six Records

George FitzGerald has released his second studio album,  All That Must Be, recorded under the label Double Six Records. The album is a smooth mystical trip from one song to the next one.

Here we have a seductive spiritual electronic record that digs into the head like a worm might an apple. The soft quiet pace of each song continuously persuades precise transitions between lyrics and the instrumental parts. In other words, if Tibetan monks listened to electronic this might be their favorite album.

The collaborations of artists like Lil Silva, Bonobo, Tracey Thorn and Hudson Scoot, bring to the album too many expectations that are not fully reached when listening to it. When comparing All That Must Be with its predecessor, Fading Love, there is a lack of explosiveness that makes the album a no-party record.

“Half Light” is the most dynamic song in the entire album, it gives one the sensation that the body wants to get rid of the soul.

“Outgrown”, co-written by Bonobo, introduces contemporary sounds of colourful dynamics that progressively carries the rhythm into a mild explosion of drumming.

Overall, this new record is fresh and innovative, but it needs a little bit more wildness.

Sebastian Mahecha is a postgraduate journalism student at Humber College. I’m passionate about music, I enjoy listening to mostly any kind of music, from thrash metal to most underground salsa. Politics and social justice have been of my interest for many years, so whenever a new musician records a song about controversial topics I’ll be there to take a look.
RELATED ARTICLES
album reviewalbum reviews
8.0