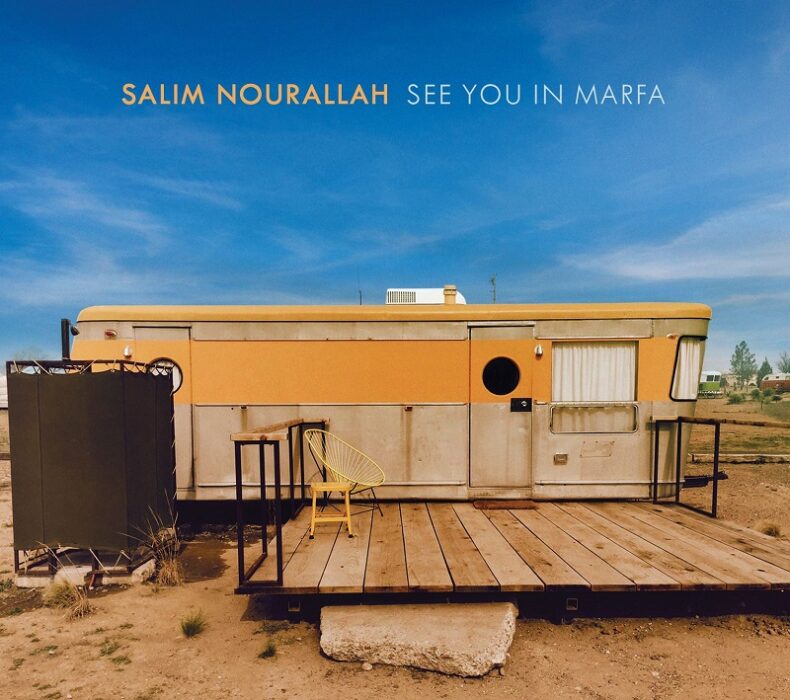 SALIM NOURALLAH – SEE YOU IN MARFA

Singer-songwriter/producer Salim Nourallah is set to release his new EP, See You in Marfa, on August 19, 2022, via Happiness (A Record Label). The EP is a result of a collaboration between Nourallah and British guitarist/songwriter/producer Marty Willson-Piper, who spent over 30 years in the Australian band The Church. Willson-Piper continues to perform, produce, and prolifically record since parting ways with the band. Nourallah is a Texan (based in Dallas) who has spent many years releasing solo records and touring Europe as well as producing a vast array of other artists; Rhett Miller and Old 97’s sit atop the list of Nourallah’s production credits. The See You in Marfa EP, which resulted from a 2018 studio session, is rife with Nourallah’s signature indie-pop/rock and sprinkled with a tiny bit of Americana goodness. The songs sound fresh and vibrant, at turns graced with a sheen of jangly/sparkling pep and verve then a hint of twangy/gritty goodness.

The creation of the See You in Marfa EP happened over the course of several years. I first met my co-producer, Marty Willson-Piper, back in 2018. He’d been a member of one of my favorite bands, The Church, when I was a teen. He’s also one of my favorite guitar players – just check out the well known riff in The Church’s song, “Reptile.” That’s Marty! Anyway, he played a show at my recording studio, Pleasantry Lane, and we hit it off. We made plans to do some touring and recording in the fall of 2018. The five songs on this EP were all part of 16 total we recorded then with my band (Joe Reyes, John Dufilho, Jason Garner, and Richard Martin).

I felt like the song “See You in Marfa” should be the lead track of its own release because it didn’t really fit with the theme of the album. The album is called A Nuclear Winter, and the 10 songs on that weave in and out of a struggle involving an emotionally fraught relationship. I’d written “See You in Marfa” once I’d come out the other side of the troubled relationship. I was falling in love with my new partner and things were pretty rosy. This song definitely reflects those good feelings – kind of the polar opposite to many of the songs I put on the album. The second track on the EP, “Not Back to Sad,” also has a similarly positive outlook. I’d played the song years ago with my brother, Faris, and thought it would be a nice addition to the pile of songs I presented to Marty. It’s almost got a Raspberries vibe to it which is something I’ve never really done with a song.

Marty helped me finish the third track, “Hold On To the Night.” I’d had the idea for the chorus for several years but couldn’t figure out where to go with it. We spent a fun afternoon pinging ideas off of each other. That was the catalyst to finishing the song.

“Love’s A Promise” was written in Austin, way back in 2014, while I waited for my friend, Martie Maguire (The Chicks). I’d been invited to her ranch to write songs with her and a few other musicians. We were “assigned” a different writing partner each day, and on this particular day Martie was supposed to be mine. By the time she arrived, I had most of the song done. I asked her to work on the words with me, but she insisted they were finished. It ended up being one of the quickest I’d written.

The last track, “Hate the Waiting,” is actually one of my favorites. It’s super stripped-down and raw, with the lead vocal actually being the “guide” track I did while the band learned the song. It was never intended to be the final vocal. I later muted most of the other instruments and reduced the whole mix to just my vocal, Richard Martin’s electric piano, and some minimal percussion. That seemed to get the emotion of the song over better. I also liked the vibe of my “scratch” vocal and never felt the need to re-sing it.

A Nuclear Winter is slated to come out early next year. Everyone will finally be able to hear the rest of the songs we recorded with Marty Willson-Piper then! We worked really hard on this record, I’m looking forward to getting out there and playing some shows once it comes out.

See You In Marfa Track Listing

Pre-Order See You In Marfa HERE