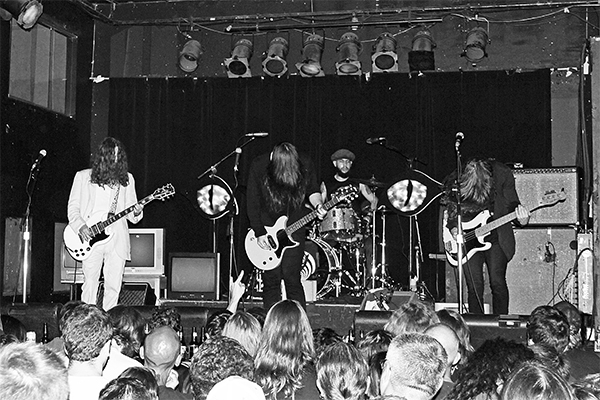 Uncle Acid’s debut Toronto appearance was a highly anticipated show for the stoner metal purists, this up and coming psych-metal mega force has toured Europe extensively since their 2009 inception and opened for Black Sabbath on a 2012 tour. To say they we’re sufficiently primed for this North American tour would be an understatement.

When I rolled up to Lee’s Palace on the evening of September 28, 2014, the usual suspects of dark and unsettling looking folks surrounded me and I felt right at home. The venue was packed from wall to wall with genre appropriate t-shirts such as Pentagram, Kyuss, Sword, Iron Maiden and other dandies. Setting the stage for Uncle Acid was a Portland, Oregon band called Danava, an act I was told NOT to miss. Despite the rough sounding board mix, Danava couldn’t have been tighter and ripped through their set with technical perfection. The harmonized lead guitars we’re simply mesmerizing and the band kicked out some very impressive 70’s era metal jams.

When Uncle Acid hit the stage, no one could move inside the Lee’s Palace, this simply added to the anticipation of what these cats were going to deliver. Seconds after they walked on stage, they RIPPED into Mt. Abraxas, the opening track on their last full length Mind Control; all 500 or so people went insane and the acid trip was in full effect. As the crowd was head banging to the ear splitting tunes, they were also waiting for the lights to slam the stage and REALLY get the show going, but that did not happen… The band brought their own lighting rig, which consisted of 5 static TV’s and 2 huge cats’ eyes that basically backlit the show. Regardless how they chose to light the stage, it did not impede their performance one bit. Musically the band was impeccable and the sound was spot on. Lead singer Kevin Starrs called out well-known tunes like Chrystal Spiders, Poison Apple and I’ll Cut You Down throwing the crowd into a frenzy of applause and screams. Uncle Acid played a perfect mix of tunes from their releases Mind Control, Blood Lust and Vol. 1 along with their new single Runaway Girls.

I think Uncle Acid is already set to be playing a larger Toronto venue next time around, either way I will certainly be there and will be bringing friends.

Andre has been writing for The Spill Magazine for over 12 years, dating back to the print days. His passion for music goes far beyond writing reviews for new music and live concerts, he is also an active musician and producer on the Canadian music scene. Having toured North America and Europe with various acts, he is no stranger to dedication and work ethic new bands must endure to make the grade in today's market; Andre always delivers perspective writing that is authentic and to the point. Mr. Skinner typically covers indie rock, grass roots, electronica and is our resident hard rock and heavy metal specialist. He is extremely selective on what bands he covers for articles and you can rest assured they are ALWAYS band to watch with something left of centre to offer.
RELATED ARTICLES
lee's palacetorontouncle acid & the deadbeats

by Jacob Vandergeer on September 20, 2022
ALICE GLASS @ LEE’S PALACE, TORONTO SEPTEMBER 20, 2022 Alice Glass was welcomed with open arms as she returned home to Toronto for a stop on her Trauma Bond tour at Lee’s Palace. Fellow Toronto singer-songwriter Anna Sofia opened the show [...]

by Jacob Vandergeer on September 4, 2022
SHAME w/ THEY HATE CHANGE  @ LEE’S PALACE, TORONTO SEPTEMBER 4, 2022 After a slight delay, South London’s Shame returned to Toronto and every attendee at Lee’s Palace on Sunday can now confidently say that frontman Charlie Steen has stared [...]

by SPILL NEWS on February 11, 2022
THE SHEEPDOGS BRING THEIR POWERFUL ROCK SHOW TO YOU Sweaty rock and roll club shows are where The Sheepdogs cut their teeth, and their masterful and larger-than-life live shows are what they are best known for. Their unique ability to breath new [...]

by Jason Fitzpatrick on November 4, 2021
TOPS @ LEE’S PALACE, TORONTO NOVEMBER 4, 2021 The evening began with a bit of a delay with doors opening later than scheduled as final touches to guests lists were still being made last minute. Keeping in mind this was one of the first shows at [...]