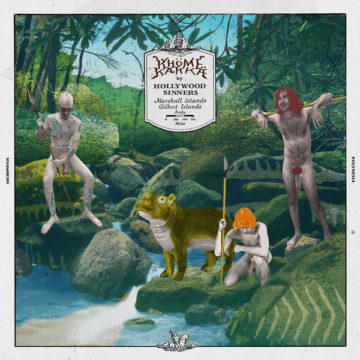 With 17 years of being a band under their belt, Spanish garage punk band Hollywood Sinners — one of the best band names I have heard in quite a while — has released their fourth full-length record, Khöme Kakkä. The record serves as the band’s long-awaited follow-up release to 2011’s Disastro Garantito, and takes a nod from ’90s garage rock and crunchy punk rock from the ’70s to create a record that is sure to come alive during the band’s live set.

Khöme Kakkä opens with “Me Da Igual,” a bouncing punk number driven by surf-rock-inspired guitar solos. It is in this element where Hollywood Sinners truly shines and stands apart from their peers. Their blend of sonic tones reminiscent of 1950s proto-punk and early punk of the ’70s is truly refreshing and can be heard throughout the record, especially on tracks like “Ultimo Cartucho,” “Asuspi,” and the Beatles-inspired album closer “I Want You.” Through reaching so far back for inspiration, Hollywood Sinners has found a sound so distinctive to another time that they themselves can easily be associated with such a period.

While often taking a route softer than most punk rock that would emerge in the 1970s, Hollywood Sinners takes an unexpected turn on “Sacaba Beach,” a thrashing number that features a reoccurring riff that is simply menacing and similar in tone to 45 Grave’s “Black Cross.” While the shortest track on the record, it is also the strongest, and, due to its stylistic contrast to the rest of the record, creates a sense of variety and gives the band a much wider range of songwriting. It would be very interesting to hear the band explore this direction more and to further flesh out the contrasting nature of their work on future releases.

All in all, despite its shorter length — only a handful of songs push past the two-minute mark — Khöme Kakkä is a fun throwback to when punk rock was defiant in the sense that it was just a group of guys trying to make some noise. Hollywood Sinners takes a note from The Ramones on their fourth album to deliver a record full of no-frills, straight-up punk rock that is often absent from today’s punk.

A passion for music has always been a part of Gerrod’s life. As a young boy, he was raised on a steady diet of the music from The Chili Peppers, Aerosmith, The Stones, Prince, and others from his mum. Raised in the GTA, Gerrod continued to foster his love for music by attending a wide range of concerts and learning the drums. His unapologetic passion for music has no bounds and has spread to a wide variety of styles, whether it be the 90’s rock that sound tracked his teenage years, the jazz he studied in university, or his newfound love for hip-hop. He recently received his bachelors in music and education from York University and is passionate about writing and reviewing good (and less than good) music. Gerrod is also the drummer and songwriter for a Toronto based rock & roll band, One In The Chamber.
RELATED ARTICLES
album reviewsdirty water records
9.0