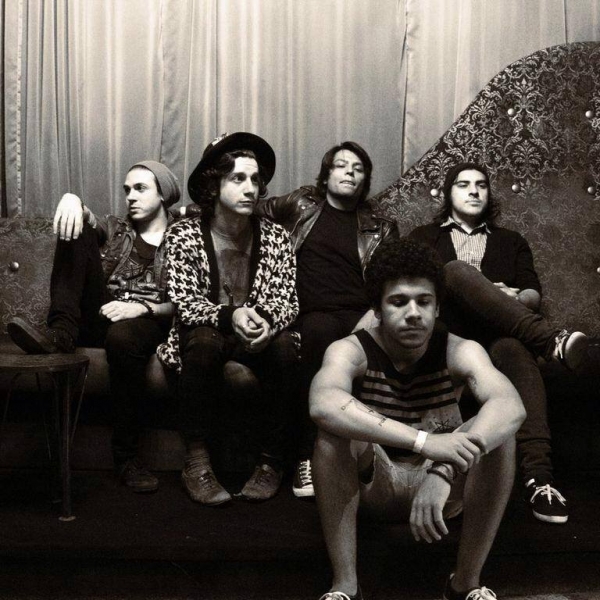 Hailing from an unmarked shipping container in a gritty industrial area of Van Nuys, The Knitts create a unique blend of garage, post-punk and anglo punk. The five-piece band captivated audiences last week with a short set of all-new material in LA at The Mint, an intimate, historic venue known for hosting both famous and up-and-coming artists.

The opening track, “Hold Steady Pretty Lady,” established the group’s tone of loud, quick percussion and sharp vocals. Each song thereafter was just as punchy and spirited, carrying elements of The Clash and Joy Division. The band’s dynamic presence amazed the audience, especially as lead vocalist Justin Volkens joined on drums in anti-prom anthem “She Likes The Idea of Gold.” This dreamy track was considerably slower tempo than the rest of the set, but still maintained the group’s maverick personality.

While The Knitts’ energy is reminiscent of a not-so-sweet-sixteen party, they have a surprisingly long history. The group traces its roots to the last years of Hollywood’s Knitting Factory. As guitarist Charlie Volkens worked in the box office, other young band members gathered around the venue.

The band closed out the evening with a new unreleased track, “Vamonos Mexico,” which transformed the venue into a surf punk vacation destination and left the audience dancing in delight.

Originally from New York, Charlie, Justin, and their father moved to California in 1997, where the brothers soon met lead guitarist Jaime “Jimmy” Luque. Various band members came and went, but the current lineup of the band was cemented in 2012 when a third brother, Brandon, joined.

“I’m a half-brother and was raised in North Carolina. I hadn’t seen them in over fifteen years, and I moved out here and ended up joining the band at a perfect time,” drummer and youngest brother Brandon Sinclair explains. “We had a different drummer, but Brandon was just so superior. We had him right under our noses,” Justin adds.

The Knitts are currently working on recording their first full-length album. “We’re going for a very vintage sound with this first full-length, in terms of production and the material,” Justin says. “We want people to know we’re a band when they listen, nothing more, nothing less. Every part of our music is as important as its counterpart.”

Last year, they recorded their first official EP, Gutterboy, in only a few days. It employed minimal production and was tight and true—and got the Knitts picked up by Knitting Factory Management.

Since the release of Gutterboy, The Knitts have gained a strong local following. They played several local gigs this past year, including The Viper Room and a July residency at The Federal Bar. Their next gig is at the Downtown Long Beach New Year’s Eve block party, headlined by Fitz and The Tantrums.

With a distinct sound inspired by a blend of punk and rock, The Knitts is a band to watch.