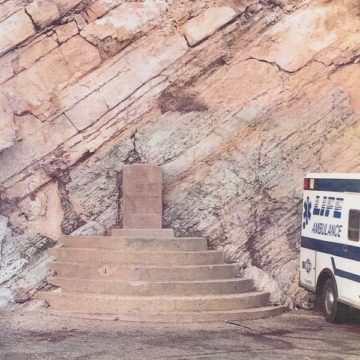 This Will Destroy You
New Others Part Two
Dark Operative

With their critically acclaimed New Others Part One having been released on September 28th of this year and a North American tour in support thereof scheduled throughout this fall, it would have seemed that post-rockers This Will Destroy You had their hands full the last few months. It’s certainly a workload that is as much as most modern artists can handle at one time.

All but the most observant and paranoid followers would have looked at the title of their most recent release as nothing more than an indication that one could expect a thematically similar follow up sooner rather than later. To be sure, though, few were expecting that followup to be released less than a month later in the form of New Others Part Two. That’s exactly what This Will Destroy you did, eschewing the typical media fanfare that accompanies most releases nowadays and dropping the album out of nowhere following a single cryptic social media post.

Apart from the release itself capturing a lot of attention, as the band would surely have been hoping for, New Others Part Two was hardly rushed through as a novelty album. Instead, the new LP goes above and beyond its recent predecessor in many ways while maintaining the aesthetic and atmosphere of that release. If anything, in hindsight at least, the sequel exposes some of the flaws of the first effort that would have otherwise been overlooked.

While New Others Part One at times compromises This Will Destroy You’s explosive energy and sound in favour of their more experimental, textural and atmospherically focused current direction, brings a greater balance between the two poles of the band’s sonic range. Tracks like “Clubs” and “Provoke” bring this improved song writing to its zenith, cruising through lush ambient landscapes towards thunderous climaxes that make anything on the previous release pale in comparison. The band sounds less forced and more focused in terms of their musical expression.

Though the band’s accomplishments in this regard should not be dismissed, the rest of the album finds itself prone to a degree of self-indulgence with its textural experimentation that (again, in hindsight) is apparent on New Others Part One as well. Oftentimes the more reflective, quiet songs on both albums seem more like an exercise in musicianship than an expression of any genuinely creative and/or emotive inspiration. It’s also between such songs in the heart of the album that the flow of New Others Part Two becomes a little clunkier and heavy-handed. However, the track “Jesse Ray” in particular, demonstrates that there is a grander purpose to these head spacey moments than a spectacle of technical prowess. This Will Destroy You certainly have the ability to create immersive, dissonant soundscapes that drag their audience through the depths of their own beings, they just haven’t been able to consistently deliver in that way across either of their albums.

Both as a whole and as a continuation to New Others Part One, New Others Part Two is once again an accomplished work of art. It effectively continues where its predecessor left off, maintaining much of the character of that release throughout and bringing the overall narrative to a fitting resolution. It must also be said that the lack of critical focus of a casual listener (as opposed to the perspective of a reviewer) will certainly allow the album to breathe more naturally and put less of an examination on the weaker points of the record. The transitions between songs are fluid and the tracklist is assembled in a way that allows the album to progress without growing tiresome, while the less inspired tracks don’t add much of a drag to the overall movement. All in all, This Will Destroy You certainly seem to be on a roll at the moment.

Based in Montreal but raised across Western Europe, Andrew feels at home both everywhere and nowhere. Having picked up the piano at age four, he has since gone on to add clarinet, saxophone and guitar to his musical arsenal. As well as crafting music, Andrew spends a lot of time listening both at home and in live contexts. Rather than focusing on a particular style or calibre of artist, he is keen to explore music of any shape or size. Outside music, Andrew's passions lie in philosophical writing, visual art and sharing positivity with the world around him.
RELATED ARTICLES
album reviewalbum reviewscalifornia
9.0