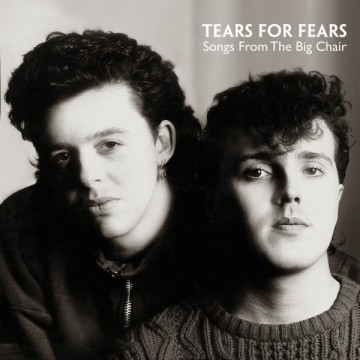 I still have the record. In fact the sleeve has come apart from all of the times I listened to it over and over. Songs From the Big Chair was originally released in 1985 and was the second album from Tears For Fears, comprised of British duo Roland Orzabal and Curt Smith.

Their first album The Hurting was incredibly unique and melancholy. Of course only the well-informed new wave enthusiasts were the first to rave about their sound. It’s a bit sad that these days when one hears “Mad World” it’s associated with the film Donnie Darko or the Gears of War video game. But on the other hand, its use in the Xbox commercial brought new audiences to appreciate Tears For Fears (and anyway, Gears of War is a damn good game).

Likewise, Songs From The Big Chair, was definitely much more radio-friendly and approachable than The Hurting, and it brought Tears For Fears into mainstream popularity back in the day.

Thirty years after its original release, we are treated to a deluxe edition of the album and as someone who grew up near Toronto and actually attended one of Tears for Fears’ shows, it’s a wonderful surprise to have recordings from the Massey Hall concerts available.

The tracks from the original album remain, and included are a number of bluesy b-sides. However, this edition also includes “The Way You Are,” which was a single released in between the first two albums.

If you were a fan of their big hits, “Shout,” “Everybody Wants to Rule the World,” and “Head Over Heels,” you will have more than your fill of U.K. or extended or remixed or radio version of these songs. It’s almost a bit much. Do we really need an a cappella version of “Shout?”

If you haven’t heard of them, give them a listen. You will never find a better summer driving song than “Everybody Wants to Rule the World.” Now I wonder if I can find my Tears For Fears concert T-shirt and, more importantly, can I still fit in it?

An educator who also tries to introduce others to great music. It's a never ending job.
RELATED ARTICLES
album reviewstears for fears
8.0