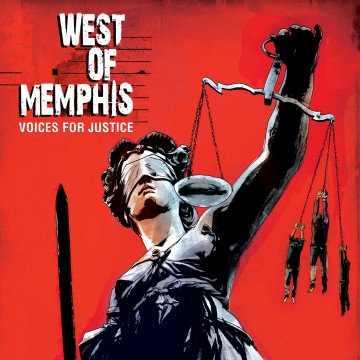 In 1994 three men from Arkansas were tried and convicted for the ritualistic murder of three young boys in 1993. Since ’94 a debate has raged whether the justice system put the right guys behind bars, culminating in a movement named “Save the West Memphis Three.” West of Memphis: Voices for Justice is the latest documentary in support of the cause, and this is the soundtrack. Standing in the long tradition of musicians backing the causes of freedom and justice, West of Memphis is a case of artists using their fame for the greater good – to shed light on a situation that doesn’t get enough attention.

Bob Dylan lends “Ring Them Bells” from 1989’s Oh Mercy to the compilation, mostly because Dylan is synonymous with attempting to get unjustly convicted men out from behind bars. However, Eddie Vedder recorded “Satellite” for Ukulele Songs (2011), but the track was penned over a decade before and inspired by the sensationalized details of the West Memphis Three’s case. Johnny Depp, another long-time West Memphis Three supporter, plays guitar on three tracks, including Marilyn Manson’s cover of “You’re so Vain.” Say what you will about Manson, but he plays up a mean cover song and makes this Carly Simon tune his own with the help of some thick Depp guitar licks. Depp also plays guitar for two tracks by Tonto’s Giant Nuts – “Little Lion Man,” a haunting Mumford & Sons cover, and a chilling reading of “Damien Echels Death Row Letter Year 16,” which concludes the album.

Natalie Maines plays a pretty version of Pink Floyd’s “Mother,” which sounds like it was written for the West Memphis Three, before they existed. Lyrics like “Mother, can I trust the government?” and “Mother, is it all just a waste of time?” really hit home, sounding even more pertinent than when sung by Roger Waters.

It would be amiss to ignore the fact that Nicks Cave and Warren Ellis wrote the original score for the film, which shows up at times on the soundtrack. To expect anything less than perfection from a Cave/Ellis score is foolish – and that’s what you get, yet again. Henry Rollins delivers an emotional reading of “Damien Echols Death Row Letter Year 9,” which is exactly what the title suggests, with Cave and Ellis’ score playing behind Rollins’ unmistakable voice. It’s an eerie highlight to the album.

In 2011 the West Memphis Three were released from prison after more than 18 years. I hope they’re doing well and enjoying the freedom that film makers, musicians and countless supporters fought so hard for them to have.