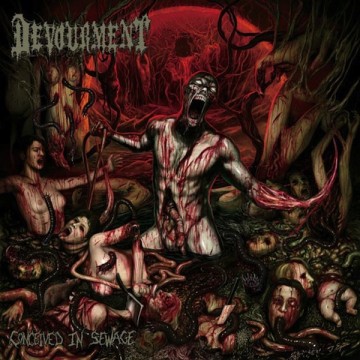 This album is a fucking crime scene. It’s a shitty room in a roach motel decorated with arterial spray, freshly sawn limbs and disemboweled intestines. Devourment’s Conceived In Sewage is rife with brutality and the stench of fresh blood. They deliver nine tracks of brutal Death Metal virtuosity with scratchy, murky chugs juxtaposed with flesh-filleting, dermis-shredding riffs. The vocals are steeped in darkness and are reminiscent of Chris Barnes in his Cannibal days. The bass and drumming just push this insanity down your throat with fevered aggression.

Devourment just keep on tossing the corpses into the grinder from start to finish. Conceived In Sewage is ferociously brutal and absolutely technical. I really wasn’t feeling this release on my first go ‘round but I’m on my second and Devourment has ripped its way into my trachea with inhuman tenacity. It’s one of those albums that take you back to 1991. These guys should have been down that hall at Morisound while Cannibal Corpse was tracking “Butchered At Birth.”

Devourment is in no way reinventing the wheel but they have crafted their own really exceptional wheel. Their wheel just so happens to be made from human anatomy. Devourment lay down a perfect foundation of old-school Death Metal, piled high with their fantastic brand of musical technicality. However, Conceived In Sewage isn’t so intricate that the tracks become forgettable (“The Faceless” or “Braindrill”). They’ve achieved a really nice equilibrium between those technical and groove laden elements within their merciless compositions. Devourment performs on a level that is comparable to Cannibal Corpse, Suffocation and Immolation. If the band continues at this caliber they will be a real force in the Death Metal scene.