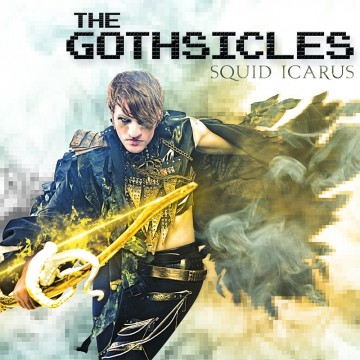 The Gothsicles’ fourth album Squid Icarus, released in December of last year by Negative Gain Productions, lives up to the standards of humor and cleverness we’ve come to expect from the ‘sicles. The added treat with this Lovecraftian geek culture dance party (as it’s been referred to by the folks over at Negative Gain) is all of the big-name producers who had a hand in the album. Faderhead, Christ Analogue, Rotersand, Assemblage 23, Haujobb, the Dark Clan; and collaborators including Zoog von Rock of Angelspit and Peter Spilles of Project Pitchfork all contributed.

This album has a little bit of something for pretty much anyone who even remotely likes anything resembling industrial music and/or has a sense of humor. Even if you can’t necessarily relate to the songs, you’re likely to appreciate them. Brian “dark_NES” (NES from Nintendo Entertainment System) Graupner, founder and core member of this self-described ultra sweaty industrial dance dorkstorm, does all programming and vocals for the band. Graupner, it seems, is brilliant and an aficionado of all things geek-culture, as is evidenced by both the music and lyrics. My educated guess is that titling the album Squid Icarus is a nod to the online game Guns of Icarus (Squid is a ship in that game). Although to be fair, it could be a nod to the Icarus, son of Daedalus of Greek mythology. I’m placing my bet on the game.

Graupner doesn’t take himself too seriously. Included in the 14-track album is “Black T-shirt” (listed as a NIN cover, and produced and mixed by Josh from CNTRLSHFT), for example, is about the plethora of black T-shirts one sees in the industrial crowd (“the cornerstone of all industrial merch”, Graupner says) – sometimes with a slight variation (he mentions both V-necks or sleeveless shirts, for example). Imparting sage advice for finding a good deal (“I’ll stock up on the three-packs from Calvin Klein too ‘cause three for under 30 is a good value”) as well as what might be the logic behind wearing them (“it always looks clean ‘cause you can’t see the dirt”), the lyrics are undeniably honest.

A close second in the silliness category is “Cthulhu Fhartwagon”, produced and mixed by Dan Clark of the Dark Clan, Stromkern, Siv, and formerly of Null Device, among others, reminding us all to never let Graupner borrow our vehicle, even in the direst of straights. Relating his experience while using his brother’s van to transport the band’s equipment to a show and polluting it with the “hella bad gas (they get) from drinking beer by the buttload” while finding all kinds of weird things strewn about the vehicle (such as “a glass with the inscription ‘all-American sports fan’, colouring books, and six bucks in change”), the song also manages to (imperfectly) rhyme the word “malady”, a feat that is noteworthy all by itself.

Angelspit’s Zoog von Rock appeared musically and vocally on “This Club Is Closed,” and the track was produced and mixed by Krischan Wesenberg of Rotersand. This one is an upbeat electronic track telling people to get the hell out in numerous ways from the perspective of someone trying to clear a dance club. The 11 additional songs include “Ultrasweaty” (again mixed and produced by Krischan), which tells a little bit about the experience of seeing the Gothsicles live (they “get ultrasweaty”) and instrumentals “Chip Replacement Surgery” and “Slime-Half.” Introducing the album is “Super Scary Action Figure (I Want to Eat Your Brain)”, which is mixed and produced by Tom Shear of Assemblage 23 and pays homage to a talking Venom action figure that Graupner came across at Powers Comics in Green Bay after it had been recalled due to being a bit too scary for kids and promises to stick in your head forever after you hear it once. Another highlight is “Give Me One More Chance to get the High Score, then We Can Go,” produced and mixed by Wade Alin of Christ Analogue, likely relatable for die-hard video game fans. “Bloodlust Software Was Awesome,” produced and mixed by Mangadrive, gives props to Bloodlust, a video game development company founded by two high school students.

The album ends with super-secret hidden track “Riding Roller Coasters with Peter Spilles,” which has nothing to do with roller coasters and is half in German. The title refers to an event that apparently did actually happen according to Graupner’s Facebook post from July 2012 about riding roller coasters with the Project Pitchfork frontman. The music for all numbers is entirely electronic, and some of them sound like they could be backing tracks for video games, which is absolutely appropriate.

All told, this album is definitely worth a listen. As a side note, its production was funded by a kickstarter campaign that came in well over its goal, leading me to believe the Gothsicles are onto something that many people appreciate.

Kathy Nichols, from the land of cheese and beer, has been writing off and on since elementary school. Her passions include hugging trees and trying to make a positive difference in the world, to which end she completed a degree in Mass Communications coupled with Environmental Science. Kathy appreciates all types of music, mainly industrial and punk and the like (especially bands who use their fame and fortune to try to make social or political statements), but with a little bit of Beastie Boys and Billie Holiday thrown in to switch things up a bit. She is the owner and CEO of www.industrialstrengthpublicity.com and enjoys long walks on the beach and (skinny) puppies.
RELATED ARTICLES
album reviewsgothsicles
8.0