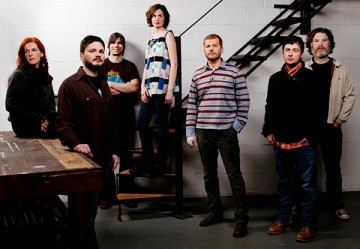 Despite freezing rain and horrible driving conditions, a handful of people had found their way to Hamilton Place, and were standing around waiting in eager anticipation. Quietly and unassumingly, Operators made their way onto the stage. With the volume set to 11, they dived in headfirst – and the audience loved it!

Operators is the latest musical incarnation of Dan Boeckner. Wolf Parade, Atlas Strategic, Handsome Furs, and Divine Fits are former and current projects of the prolific rocker. Accompanied by Divine Fits’ drummer Sam Brown, Devojka on synths, and a touring bass player, the band broke the ice with a rousing version of “Ancients.” The bouncing synth beats, contrastingly airy drumming, and booming bass were the perfect backdrop for Boeckner’s keyboards and vocals. The band had the audience dancing right out of the starting gate.

Devojka plays the synths live, with the precision and frenetic energy of a pilot at the helm of a 747. Nothing is prerecorded and there is not a laptop to be found. Brown is a phenomenal drummer – his style is eclectic but somehow low-key, avoiding booming bass drums in favour of masterful work on cymbals, high tom-toms and the snare drum. Boeckner is certainly comfortable as front man, pushing his vocals to the limit and bouncing back and forth between keyboards and electric guitar.

As the standing-room-only hall filled, the band followed up with “Start Again,” “Shape,” “True,” and ended with “Cold Light.” There was nothing cold about their performance that night, and the audience was heated up and raring to go by the time the band was done with them. The audience members not familiar with Operators certainly left with the sense that this is a band to be recognized.

After a short break, the New Pornographers walked swiftly onto the stage and dived right into their first number — the title track of their new album Brill Bruisers. The band has managed to create a “wall of sound” that rivals that of ‘60s phenomenon Phil Spector’s. They opened the show with a bang, leaving the audience feeling like they’d run into said wall. 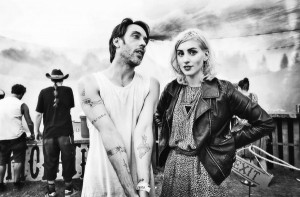 From the get-go it was clear that Carl (A.C.) Newman (solo performer, also from Superconductor and Zumpano), who was on vocals and guitars, was at the helm. The band also comprised of Dan Bejar (Destroyer, Swan Lake, Hello, Blue Roses), Kathryn Calder (solo, Immaculate Machine), Todd Fancey (Limblifter) on lead guitar, Blaine Thurier on keyboards, John Collins (The Evaporators, Destroyer) on bass, Lindsay Hames (The Ettes) on acoustic guitar, and Joe Seiders on drums.

With their complex, sophisticated vocals and intricate harmonies, Newman, Bejar, and Calder took turns leading vocals, and shared the spotlight on several numbers. Bejar would walk on and off the stage to perform his numbers, hanging up his microphone and guitar before exiting. It was a phenomenal performance by the band, despite Neko Case’s noticeable absence.

The band moved seamlessly from song to song, with Newman sometimes exchanging light banter with the appreciative audience. They were treated to selections from each of their six albums, with their most recent, Brill Bruisers, being performed almost in its entirety. The New Pornographers is clearly a well-oiled machine, and that night they were at peak performance.

The audience had braved the elements and driving conditions and was ready for a rousing performance. No one was disappointed. It was a phenomenal hour and a half, and the band willingly returned for a three-number encore. It was a great evening, one that will not soon be forgotten. 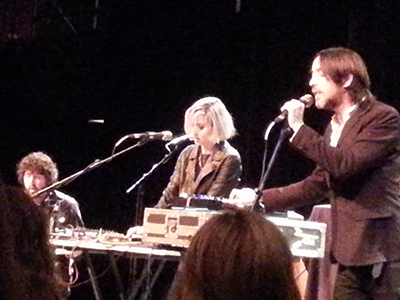 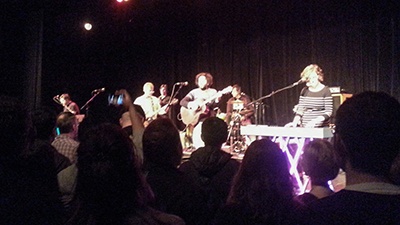 Champions Of Red Wine
Born With A Sound

Trish Melanson lives in the Toronto area with her three boys, Nicholas, Justin, and Eric, her dog Jakkson, and her cats Max and Jagger. She is the former host and producer of Canadian Kickass, a weekly two hour radio show on New Jersey's Chestnut Radio, showcasing Canadian Music. She is also a former Web Content Manager of Indie Soundscapes, an online showcase for Independent Music Artists Worldwide, and was a regular music contributor to The Stroumboulopouli. She is a fervent supporter of the Toronto live music scene. In a past life she was a teacher and Vice Principal in Durham Region. She has many more new and exciting projects waiting in the wings. ;)
RELATED ARTICLES
hamiltonoperatorsthe new pornographers