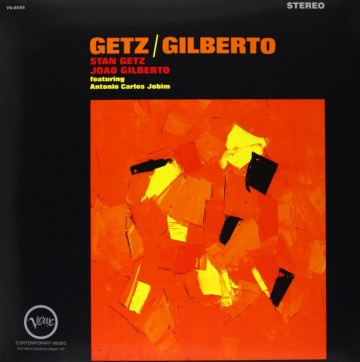 50 years ago, tenor saxophonist Stan Getz collaborated with Brazilian singer and guitarist Joao Gilberto, his wife Astrud Gilberto and pianist/composer Antonio Carlos Jobim to produce what I would call the “Kind of Blue” of Brazilian Jazz. The album would go on to win four Grammy awards, including the two top prizes for Album of the Year and Record of the Year for “The Girl From Ipanema”.

In this expanded edition, it is primarily a feast for the audiophile and jazz collector since the edition features both the stereo and (for the first time on CD) mono versions of the eight classic tracks, plus two bonus tracks of the singles version of “Ipanema” and “Corcovado”. In addition to the classic liner notes from Getz, Gilberto and Gene Lees, it also features a newly penned essay from Marc Myers and lots of photos taken from the session.

For those wanting to acquaint themselves to the beauty of Brazilian jazz and have good music in time for the World Cup, Getz/Gilberto is a must-have simply because it is timeless music performed by timeless musicians at the peak of their careers. This is also an important album that defined an era and a culture in the 1960’s that was exploring and trying out new and exciting things, such as the fusion of cool jazz with Brazilian melodies and beats.

The music in Getz/Gilberto also showed that jazz could be innovative and popular without watering down the music or becoming too abstract to alienate the listener. It was easy, peaceful music, with Stan Getz improvising cool lines on his sax, and the voices of Joao and Astrud adding a romantic subtlety to the music. Jobim may have played sparsely on the album, yet through compositions such as “So Danco Samba”, “Corcovado” and the smash hit “Girl From Ipanema” it has cemented him as a bonafide jazz legend.

Getz/Gilberto is a fitting way to celebrate and commemorate a classic album in all of its award-winning glory, winning old and new fans alike with its unmistakable charms.