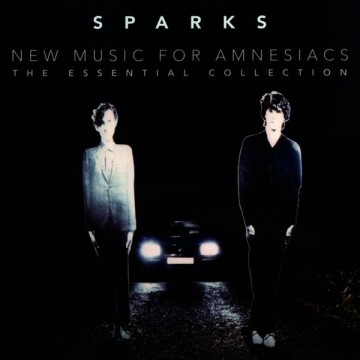 Looking for a last-minute gift for the glam rock/new wave/adventurous music fan in your life? Check out New Music for Amnesiacs, the five-disc box set and accompanying hardcover book devoted to Sparks.

For over forty years, Los Angeles-born brothers Ron and Russell Mael have been making strange and wonderful music under the name Sparks. Their brief decampment to London in the era of Bowie made them bizarre teen idols – Russell with his incredible, operatic soprano and androgynous looks to match, and Ron with his seething stage presence and, shall we say, abbreviated mustache. Their early chart heyday granted them a devoted core audience and allowed them to collaborate with notable artists such as Giorgio Moroder, Jane Wiedlin and filmmaker Guy Maddin.

New Music for Amnesiacs serves as an autobiography of sorts of the Maels, chronicling their musical and artistic evolution. Over the span of five discs, the brothers take us from their earliest work as Halfnelson, through their years of ubiquity, and into their more adventurous periods. While not all their material works – “Little Girls” from their 1980 France-only release Terminal Jive brings the mix to a halt after the brilliance of the Number 1 in Heaven tracks – you can hear the band’s willingness to experiment and play with music.

Though New Music doesn’t include as much unreleased material as one would hope, it’s great to hear some of the harder-to-find tracks, such as their collaboration with French pop duo Les Rita Mitsouko and their early ‘90s single “National Crime Awareness Week”. The bonus disc includes the first official release of “Islington N1”, the song commemorating their series of concerts in London in 2007. Thanks to a sparkling (heh) remaster, the songs have never sounded better.

The accompanying hardcover book traces the artistic and commercial rises and falls of the Mael brothers and puts the material into a greater context. First editions of the set also include a wealth of extras that will make die-hard fans squeal, such as handwritten lyrics straight from the pen of Ronald Mael, reproduction contact sheets of the Maels’ portrait session with Richard Avedon, pinbacks, and tickets.

If you’re a fan of daring music from the past half-decade, Sparks is likely to be your favourite band’s favourite band. New Music for Amnesiacs represents a great point of departure for new fans and a must-have for longtime admirers.