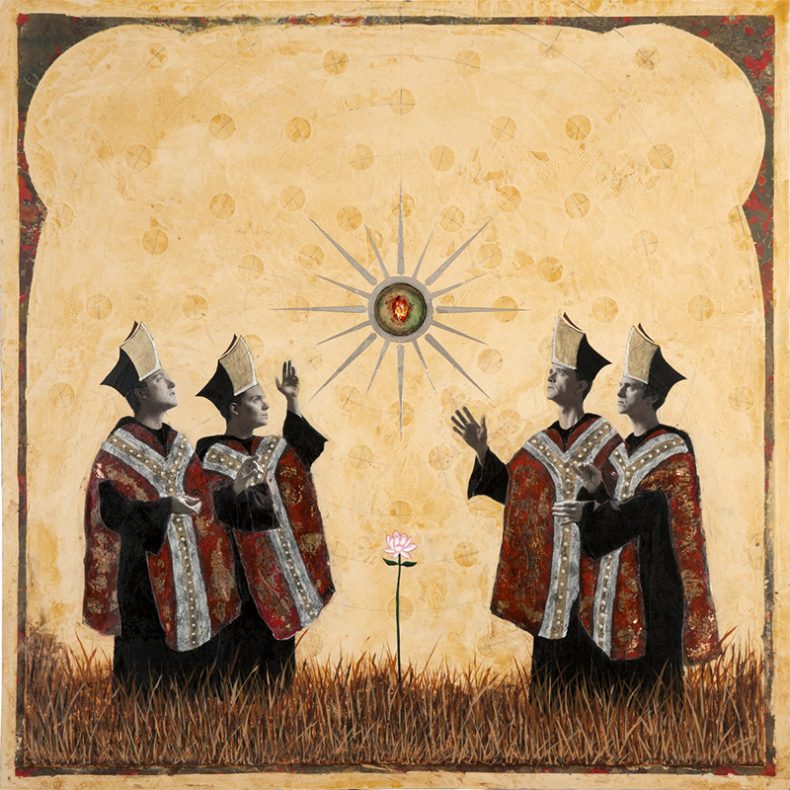 NOT BLOOD PAINT – BELIEVING IS BELIEVING

Not Blood Paint is a theatrically vivid—and sonically intense—four-piece from Bushwick, formed in 2008 by guitarists George Frye and Joe Stratton, bassist Mark Jaynes and drummer Seth Miller.  Here they have shared a track by track guide to their new album Believing is Believing. Some of the tracks have inspired pictures which you will see below.

Musically, it’s a group impossible to pigeonhole, far removed from traditional verse-chorus-verse structures. The songs manifest as detailed stories that worm into the minds of always-shifting narrators. At different times, you’ll think Zappa, Ween, Primus, Gang of Four, Devo, early Genesis, Tool, Dirty Projectors. (The band itself would proffer of Montreal. “That group inspired us in the beginning. We’d go dress up and dance our asses off when we saw them live.”) 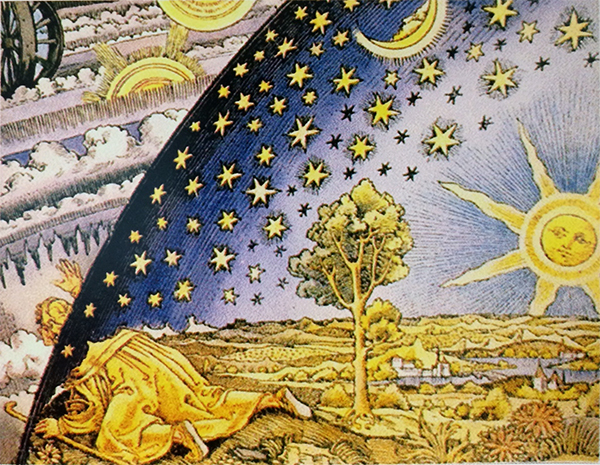 AsAnAside: In a personal touch he tried to keep secret even from the rest of the band, George finds a way to secretly name his love in this song. Can you find her?

Play Nice is sort of an emotional foil to the album’s opener Take Another Chance. While that song draws heavily on an autobiographical declaration of newfound love, Play Nice broadcasts from the cobwebbed cellar of quite a differently disposed character. Rebirth vs stagnation, in both cases anchored by the actions of an idealized other.

AAA: NBP geeked out hard when they first showed up to Galaxy Smith studios and discovered that they were equipped with a Hammond B3 organ and Leslie speaker – a set up with a storied history in prog-rock. The part in Play Nice was improvised and captured in 3 takes by the album’s producer Kahan James.

After a messy encounter with what was either a voluntarily homeless man or a master of the universe, Joe began penning the lyrics for ‘I Am An Angel’. The song investigates psychopathic morality – it’s an attempt to take on the interior headspace of an individual free from the burden of empathy.  Is this power real or self-perceived? How are the spellbinding aspects of various systems of belief exploited in today’s identity politics?

AAA: The stretched and distorted sounds you hear on this song (and peppered throughout the whole album) are all derived from real-time captured manipulations by Kahan of vocal performances from the band.

This song begins out of the primordial ooze with accidental organisms splitting and babbling along. After the birth of reflection comes an adventure of ideas, reason and analysis, attempts to control nature, entropy and chaos pushing at the boundaries. The bone-crunching crisis of disillusionment may destroy or it may provide an opportunity for voluntary self-rearrangement.

AAA: An early version of this song was called ‘Canyon Fire’ and included a tribal incantation from primate man, possibly as an effort to account for the millions of years omitted from the process being described. 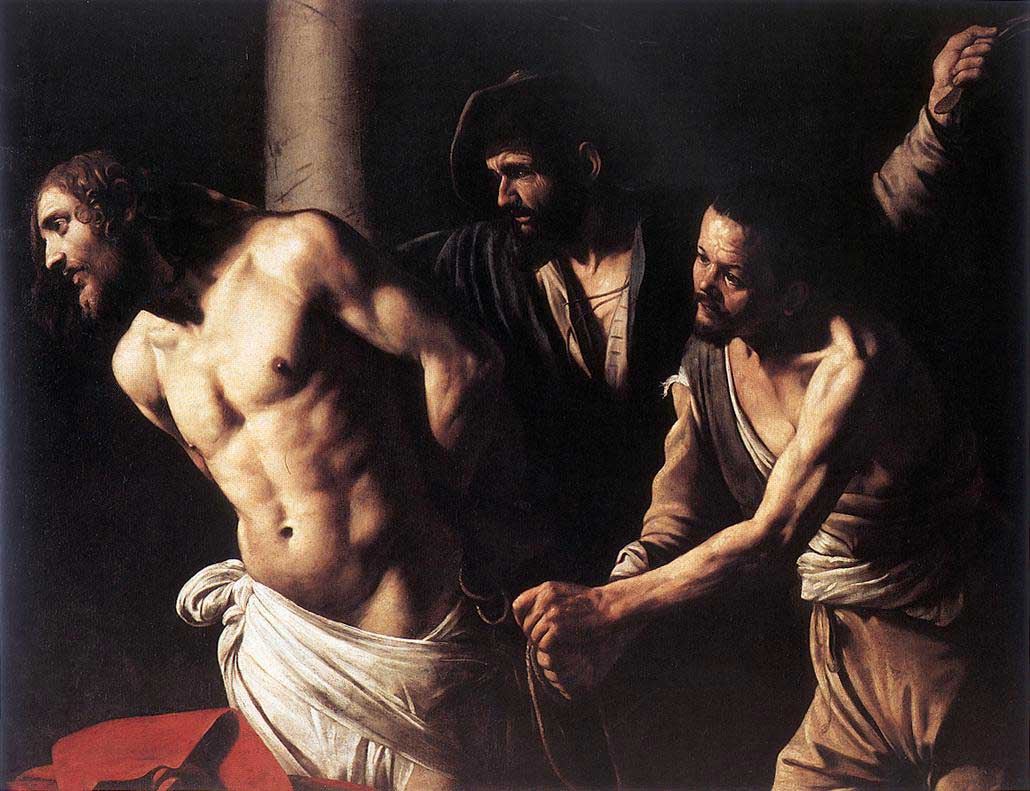 CARAVAGGIO’S “THE FLAGELLATION OF CHRIST”

AAA: When recording this song, a passing ambulance siren was unintentionally captured during one take. Considering it a happy accident quite fitting of the subject matter at hand, Kahan kept the siren in the final version.

Kafka once said that we need books that hit us like a most painful misfortune, like an icepick to the frozen sea inside us. One By One is a song for the same purpose. It’s about the total annihilation of will, of life as crude resource. It’s a sing-a-long.

AAA: The Kafka quote that One By One references is from his biography. It reads “Plenty of hope – for God – no end of hope – only not for us”.

Two strangers lock eyes briefly, and part ways forever. For one, the weight of this look plunges him into the deepest well of desire. Obsession elevates and transforms the absent subject into the unattainable symbol of pure femininity. Worship of the divine as a negation of the actual – sacrifices at the altar of ultimate concern.

AAA: The pagan symbol for “maiden, mother, crone” (or the Triple Moon Goddess) is the Goldsmith symbol turned horizontally. Coincidence? 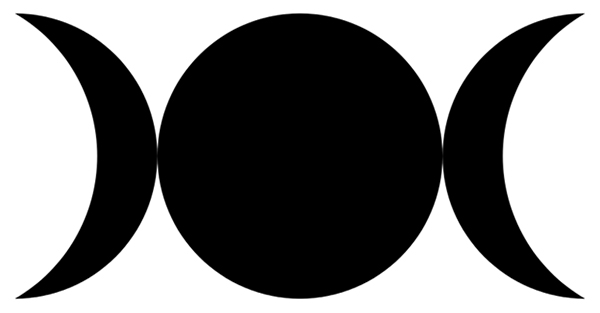 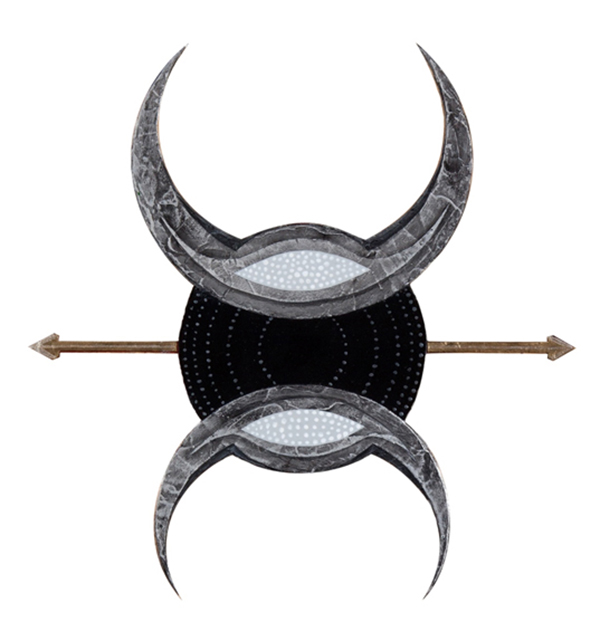 THE GOLDSMITH SYMBOL (AS VISUALIZED BY JOHN McGARITY)

Successful entrapment plays on the promise of shared risk and glory, of camaraderie, of righteousness and justice. The scapegoat is dressed for the part and gifted with the tools of his/her own destruction. Whether this tactic is used by the music industry, a corporation, or the FBI, it always destroys a life and fixes a false narrative.

AAA: Originally, Joe and George were writing two separate songs to the same riff. Instead of one version beating out the other, the two stories began to intersect little by little until a full narrative told through two perspectives appeared.

The ancient Greeks believed that storms and other natural disasters were the physical manifestations of spiritual battles among the gods. Detailed guidelines for hospitality were developed and encoded into their myths as a way of both living as harmoniously as possible with the various wills of the spiritual world and as self-protection against exploitation. As natural disasters ramp up in intensity year after year in modern times, we find ourselves dangerously soothed by the Normalcy Bias and lacking intimate connection with our physical environment. Will we be prepared to act appropriately when the flood is at our doorstep?

AAA: George utilizes a unique tuning for this song. The bottom 4 strings of the guitar are tuned like a cello with a very low C. The B string is tuned to a C# and the high E has been removed.

Human equilibrium requires two feet: opposing forces of justice and mercy, reason and faith, affirmation and denial. To trip these two feet is to seek ultimate control over the movement of life, an operation of black magic. Life treated as exploitable resource, under the guise of ushering in a new age of freedom, is the source of all war. Humanity might break the cycle if we learn to walk with a staff into the unknown. Until then: rinse and repeat…

AAA: The poem Worlds on Worlds are Rolling Ever by the English romantic Percy Shelly is quoted in this song. 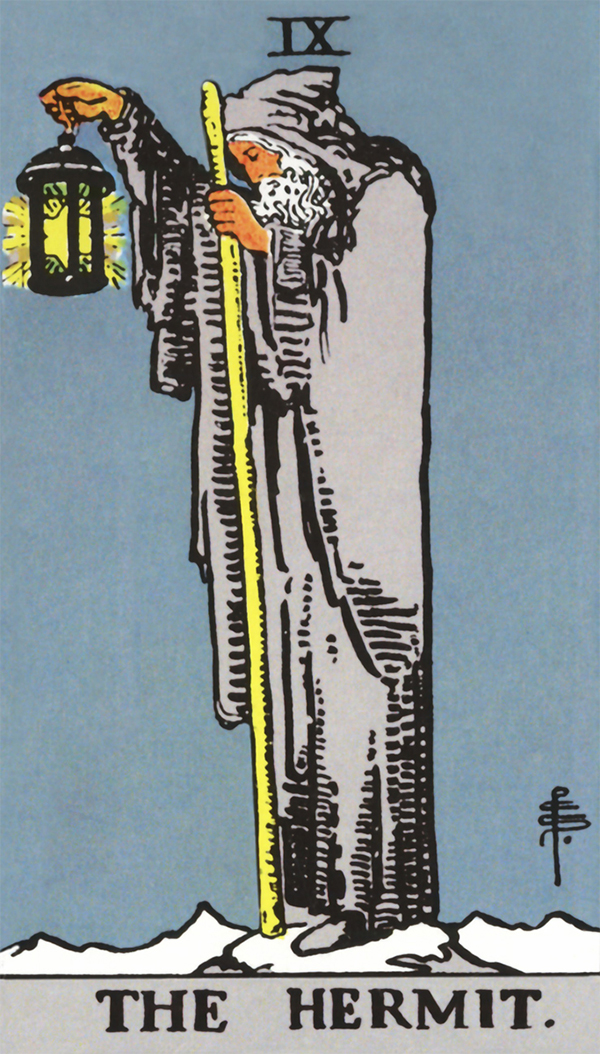 *FROM THE RIDER-WAITE TAROT DECK

SPILL NEWS strives to keep our readers up to date with news and events in the music industry. We keep you informed of the most recent information regarding new releases, tour dates, and information items about your favourite artists.
RELATED ARTICLES
features

by Freda Looker on May 22, 2020
SEARCHING FOR A NEW AND WONDERFUL CREATION A CONVERSATION WITH KELCEY AYER OF LOCAL NATIVES L.A.-based Local Natives has [...]