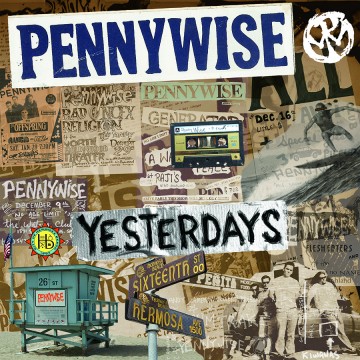 Pennywise, the punk legends from Southern California, have just released their eleventh studio album, Yesterdays. As of 2013, this album marks 25 years of Pennywise. The album includes many songs that were written by former bassist, Jason Thirsk, who passed away 18 years ago. To say the least, Yesterdays does the fallen icon justice.

The work by Thirsk had never previously been recorded. Vocalist Jim Lindberg via Epitaph Records, explains: “We always wanted to go back and record these songs because later in our career we started to get more political and angry— that may have turned some people off but that’s what we were feeling at the time … In the back of our minds we knew we had these cool, old songs that were more life-affirming, it just took us 25 years to get back to it.”

The evolution of punk has been vast and fast. Many trends and bands often find their way to ‘old school’ status in less than 10 short years. With that in mind, there is a hefty weight on the shoulders of the ‘classic’ punkers to keep themselves relevant, without conforming to changing trends. A few veterans maintain relevance and are the encouragement of generation after generation; some achieve influential levels of success and accept their page in history, which is no doubt respectable. Others refuse to let the dream — or the income — die. We’ve all seen those 40+ dudes whose band had a few tours in the ‘80s and ‘90s and still play the same 10, four-chord songs that they’ve played for 20 years, which wear us out with tired examples of exaggerated egos.

Which brings us back to Pennywise: a machine seemingly oblivious to trends and resistant to irrelevance. Even though their name hasn’t had much weight in headlines or album charts in recent years, make no mistake that they are always present.

While not officially labeled as a ‘tribute’, it’s difficult to consider Yesterdays as anything else. It is simple and honest. Not solely a tribute to a fallen friend, but also to a fallen generation. The world today is sparse in similarity to a once glorious scene. The kids are falling for the weakest sleight of hand; governments worldwide are fighting their own people. Music is one of the few purities and Pennywise have voiced the minds of an ever-silenced era. Naturally, this is all orchestrated so well that each time after “I Can Remember”, you’ll have an urge for “What You Deserve”.

Yesterdays will be around for many tomorrows.

Fearless and well-traveled journalist with a penchant for the truth.
RELATED ARTICLES
album reviewspennywise
8.0