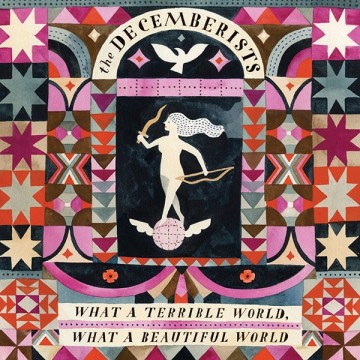 The Decemberists
What A Terrible World, What A Beautiful World
Nonesuch Records

The new year is off to a great start with the release of The Decemberists’ new album, What a Terrible World, What a Beautiful World. It has been a long five years since the release of The King is Dead and unfounded rumours the band’s long-planned hiatus was code for their secret intent to break up.

Well, here we sit in 2015 and the new album is simply terrific. The Decemberists are a welcome musical distraction for the next few weeks of winter while we patiently wait for spring.

This album is refreshing and pensive. The music video for “Make You Better,” released in December and starring Nick Offerman, is very manly and will tickle you pink. If you haven’t seen it, I highly recommend investing five minutes of your time to see the musings of Mr. Franz Lieberwurstshlesser, who is very apathetic to the great hit “Make You Butter,” and asks deep philosophical questions about the meaning of existence.

It is important to note this recording is not Picaresque or The Hazards of Love. A Terrible World, What a Beautiful World showcases a cohesive collection of songs filled with the same brilliant lyricism and melodies of the past, but stops short of making them fill an overarching collective theme.

“Till the Water is All Long Gone,” “12-17-12,” and “Carolina Low” are the highlights of this great release. There is just something magical about them that makes them so captivating. The lyrics of Colin Meloy have not lost any of their heavenly luster through the long hiatus.

The album title stems from the song “12/17/12,” which could be mistaken to be the reference to the birth of a child like “316” was on Van Halen’s F.U.C.K. album. In fact, the title is a reference to President Obama’s speech addressing the Newton School shootings, which deeply impacted the band’s consciousness. As the title suggests, times of great pain and suffering point out what is most bestial in humanity, but in that crisis it also sheds a light on the heavenly side of our human nature, and highlights what is really important in life.

The Decemberists will invade the iconic Massey Hall on March 30, 2015. It should be a spectacular show, from a band poised to continue making wonderful music for a long time to come.