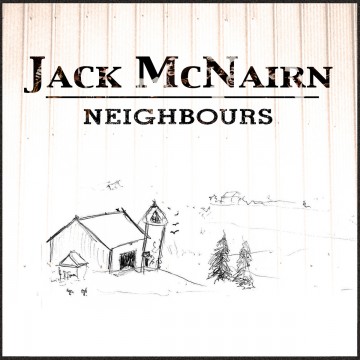 The first track hits like a James Brown number. Maybe it’s the guitar. Maybe it’s just me. Jack Mcnairn’s Neighbours is a retracing of steps and a travelogue of influences from Deep South Rock ‘n’ Roll to mop-top British invaders. A crazed Doors meets Beatles Five-to-One on “Marker Me Darker,” and a variable compendium of Black Crows, Willburys and Allman Brothers on “Alibi.” While a reflection of tastes is usually expected out of new artists and bands alike, similar suspicions – though certainly justified – are wildly surpassed. “Hey Man (It’s Alright)” is a terrifically loud drone of a track. It’s like wheels spinning in the ditch start to finish.

Mackenzie Jordan, one of three songwriters in the band, tends to be very economical with his lyrics. Nowhere on the record is this used more effectively than in “Run Like Hell,” apparently inspired by the life and death of Johnny Cash. This track is the rock of the record. It’s got staying power. Every word comes off as absolutely essential, and Jordan sings accordingly. Lyrically, “Marker Me Darker” is exactly the opposite, but it doesn’t seem to matter in a track where all you want to hear is that John Lennon-esque scream on the part of Michael Vukovich. It’s as if the man swallowed a cheese grater (no explanations, just listen to it).

The record floats on an absolute barge of Classic Rock and Blues influences, but float it does. That’s not an easy thing to pull off. One false step and you’re playing deadbeat bars and listening to an old fart of a man yammer on about his ’80s cover band. But the record works. It’s a strong, magnetic listen, all nine tracks through.

I don’t get the impression that the band set out to sound like anybody else. They certainly do, but there’s innocence in that. It’s that innocence that saves this EP from the common death wish of throwback bands. That is, the risk of being contrived. There’s a sincere belief and love in both the music they write and the places it comes from. That is not to say that sincerity is all you need.  Belief without cause or reason is, after all, complete delusion; but each band member has a certain intuitive style about their playing, singing and song writing that makes them able to somehow dodge the pratfalls of similar bands.

It’s an ambitious EP and I wouldn’t see it changed. In fact, I’d keep an eye on Jack McNairn if I were you. Within Neighbour’s familiar sound is the potential for something quite unique.