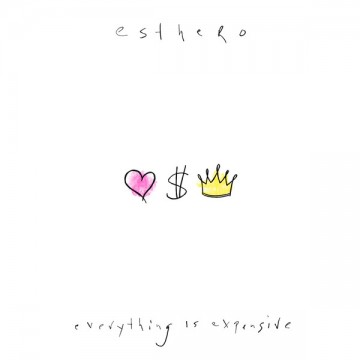 Everything Is Expensive is Esthero’s first release since 2005’s Wikked Lil’ Grrrls. The Los Angeles-based Canadian-born singer returns with a poppy album brimming with heartfelt ballads and peppy toe-tappers. But for all their glossy sheen, the songs lack substance and memorability.

While a catchy hook can be seen here and there, nothing really sticks, or sticks out, for that matter. Esthero gets stuck in a formulaic-Pop-song rut, resulting in an album that is lacklustre at best.

Some songs prove to be valiant efforts, showing promise at the beginning but slightly disappointing as they progress; the album’s most enjoyable track, “How Do I Get You Alone,” opens with a glitchy electronic waltz that entices and creates sanguine expectations, but swerves into a territory that, although not terrible, is not exceptional or stellar.

Esthero’s voice is pretty, ranging from crystalline and delicate to belting and brash, but is not done justice by the weak and generic compositions on this album.

When all is said and done, a shiny veneer doesn’t go very far; Everything Is Expensive fails to break out of the humdrum, run of the mill Pop matrix and settles for being forgettable and bland.