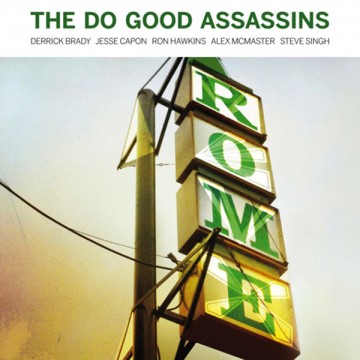 Rome is quite an ambitious move – a double-album debut from Do Good Assassins, the latest band from Lowest of the Low singer-songwriter Ron Hawkins. In most hands, this would be an abysmal failure, but Hawkins is rightly renowned for his songwriting and it’s well displayed here.

The greatest flaw on this set is the desire to shoehorn the songs onto separate Rock and Country discs. Each is ten songs long, and both contain some stellar songs, (“Spotlight,” “A Little Rain,” “Propellers” and “Public Transit” are among the highlights), but the need to segregate them underestimates the audience. From Shakespeare My Butt (Lowest of the Low, 1992) on up, Rock, Folk and Country have always cohabitated on Hawkins’ albums more amiably than most married couples.

On the Country disc, the songs revel in the open spaces provided. Embellishments like slide guitar, female vocals, cello and organ all feel organic to the song. Occasionally things sound familiar (“Too Far” sounds eerily close to LOTL’s “Under The Carlaw Bridge”), but more often than not the band strides further out onto uncharted plains than you’ve come to expect.

The Rock disc, however, is the poorer cousin. The disc features too few nods to Hawkins’ Punk roots, touching more frequently on ’70s Elton John and Stevie Wonder style Pop. They pick up the pace near the end of the disc (“Home Sweet Home,” “Wrap You Up And Take You Home”), but it still doesn’t touch the cathartic abandon of Greasing The Star Machine (1998) or Crackstatic (2000), Hawkins’ albums with his former band The Rusty Nails. Also, the production on several of the Rock songs sounds claustrophobic and hastily assembled. On tracks like “Sadder Days” the guitars and vocals lack the proximity to make the performances sound believable.

While there are definitely enough good songs here to justify a double album, I definitely would have appreciated a more even sequencing. A song like “Propellers” could justifiable fit on either disc, but the separation creates preconceptions in the listener that don’t work in the album’s favour.

The Spill Magazine is a Toronto-based online publication dedicated to covering the independent music scene with a strong focus on our thriving hometown talent. Our writers bring you up-to-date news, in-depth features on musicians and reviews for the latest CD releases. We also travel to the front lines for all local festivals including Canadian Music Week and North by Northeast. Don’t forget to check out our Facebook and Twitter pages for all daily Spill updates.
RELATED ARTICLES
album reviewsrome
9.0