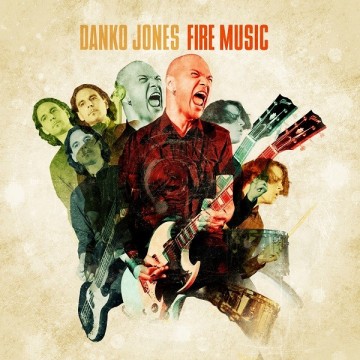 The return of Danko Jones comes with great timing, challenging a music scene that is overrun by shoeless, whistling and clapping hipster bands. Their new release Fire Music cuts through the crap and brings headbanging back to center stage, leaving jaws on the floor and moshpits raging. The opening track “Wild Woman” kicks you in the gut by ramming HUGE guitar riffs down your throat, along with crushing basslines and monster drum beats. Lead man Danko Jones delivers in spades with wicked power behind his vocals and gripping lyrics, while pulling off guitar heroics on every song. The band’s AC/DC simplicity is what keeps your attention; there’s no fancy soloing or trickery, it’s just vicious hard rock that’s easy to listen to. “Piranha” exemplifies the power this band can unleash. The song has shades of Motorhead with bloodcurdling screams and crushing drums. The chorus is like an H-Bomb that will decimate your speakers while D.J.screams “She’s a Piranha.” “Gonna Be A Fight Tonight” is definitely one of the bigger tunes on the album and is hit-single worthy; it’s a hard rock anthem of the highest order. This song could be played for Hockey Night In Canada or before a UFC match, and the video game industry will likely scoop it up before long. For anyone into shit-kicking hard rock, Danko Jones’ Fire Music is a MUST!

Andre has been writing for The Spill Magazine for over 12 years, dating back to the print days. His passion for music goes far beyond writing reviews for new music and live concerts, he is also an active musician and producer on the Canadian music scene. Having toured North America and Europe with various acts, he is no stranger to dedication and work ethic new bands must endure to make the grade in today's market; Andre always delivers perspective writing that is authentic and to the point. Mr. Skinner typically covers indie rock, grass roots, electronica and is our resident hard rock and heavy metal specialist. He is extremely selective on what bands he covers for articles and you can rest assured they are ALWAYS band to watch with something left of centre to offer.
RELATED ARTICLES
album reviewsdanko jones
8.0