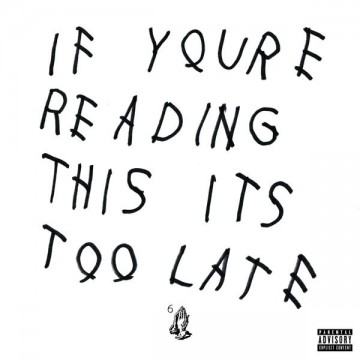 If there’s an Aziz Ansari equivalent in the rap genre, it might be Drake. But comedian Ansari’s swag lust and posturing comes off as personable and self-aware. Drake, however, presents himself with pretense. It’s hard to tell where the reality ends and the entertainer begins. But the same could be said for any popular recording artist; Drake just seems to make sure everyone’s still paying attention at all times. Which makes this oddly, silently dropped, more personal assemblage of tracks such a mystery.Drake’s lyrics on If You’re Reading This It’s Too Late wax introspective, a more prevalent trend on his latest releases. One wonders if he’s tapping into his Kanye West or Hamlet. “I was. Running. Through. The. Six. With my. Woes!” It’s like the listening public has been invited into Drake self-help forum where his id and ego battle to the death every Wednesday night. “Know Yourself” transcends the range of what we’ve come to expect from Drake, as if by releasing this mix tape he’s been able to operate outside the stricter confines of his major label commercialism. (Questions still remain about the motivation for releasing this album – a gambit to fulfill his obligation to Cash Money?) As a singular entity, the album feels simultaneously more focused but wildly erratic, a negative that could have easily been alleviated with a more strict regimen for cutting chaff. At 17 tracks, four or five could have been lost without sacrificing the odd ebb and flow of sparse synthetic landscapes with rat-a-tat beats droning off from neighboring cloister. “6 God” feels like an impromptu freestyle gone wrong. Drake pushed a fun button on the Casio and got sucked into the groove. “Jungle” just feels like recycled Drake from older, Drakier records. The oddities and introspection make for an engaging, if not wholly satisfying, experience.The other day Lil Wayne said he’d annihilate Drake on the mic. Honestly, I don’t even know what to think about statement. Rap music has reached a stylistic crescendo that hasn’t been seen in many years with the rise of heady rappers like Shabazz Palaces, Kendrick Lamar and Joey Bada$$. Even with this heavily lauded release, I don’t see Drake approaching any of their talent. Lil Wayne’s bravado even calls into question the genre’s growth. What does it even mean to be a great rapper anymore? While this is a revival of a decadent, decaying genre, poisoned by posturing and regurgitation, something’s still been lost as rap has crossed over into mainstream, Top 40 focus. If Drake is the figurehead for this revival, the one taking the shots of jealousy at the top of the mountain, I can’t help but think there’s still a long way to go.

James David Patrick has a B.A. in film studies from Emory University, an M.F.A in Creative Writing from the University of Southern Maine, and an honorary Ph.D. in bullshitting about everything else from the College of Two Pints. His fiction and non-fiction has appeared in PANK, Monkeybicycle, Squalorly, Specter Lit, and Bartleby Snopes among other wordy magazines. While he does not like to brag (much), he has interviewed Tom Hanks and is pretty sure you haven't. He bl-gs about music, movies, and nostalgia at thirtyhertzrumble.com and runs the James Bond Social Media Project at thejamesbondsocialmediaproject.com. James lives in Pittsburgh, PA.
RELATED ARTICLES
album reviewsdrake
8.0