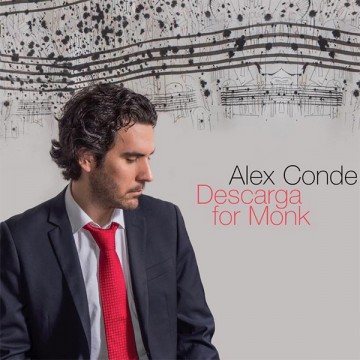 Reinventing the classics: In Descarga for Monk, pianist Alex Conde and his band interpret nine of Legendary pianist and composer Thelonious Monk’s compositions through the lense of Conde’s Spanish upbringing.

Monk produced a body of work rich in harmonic, melodic, and rhythmic variety. Whether it’s straight ahead, avant-garde, or Latin influenced, there’s always something new to discover and explore when interpreting Monk’s music.

In the openers “Played Twice” and “Ugly Beauty,” Alex transforms these two compositions effectively into flamenco workouts complete with percussion, foot stops, and hand claps that bring a rhythmic, world-influence edge to Monk’s music. “Evidence” is a creative take on jazz salsa, in which its interpretive arrangement makes the listener want to dance and groove to the exotic rhythms. Conde is a sensitive solo pianist with his interpretations on “Pannonica” and “Round Midnight,” embellishing the timeless melodies and applying his Spanish rhythmic influences into his solo playing.

Descarga for Monk is a fresh, exciting, and bold new interpretation of the familiar and original music of Thelonious Monk. Artists like Conde show that jazz is truly a world music, effectively absorbing and applying such rhythms and concepts into great new musical discoveries.

Conrad Gayle is a jazz pianist, composer, and writer. He released three albums, "Genesis EP", "Foundations" and "The Live Sessions 09/10", his first book "The Real Conrad Black", has an active YouTube channel and maintains his own blog site called "The Conrad Gayle Review". He is a graduate from York University with a degree in sociology. He is also active in the city of Toronto as a solo artist and leader of his own trio, as well as being the regular pianist in his home church. He has written for the Spill Magazine for over four years and is planning on continuing the course to become a very successful writer.
RELATED ARTICLES
album reviews
7.0