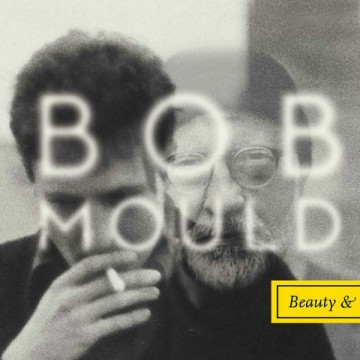 Bob Mould’s eleventh solo album by and large finds him sounding rejuvenated. Opener “Low Season” has growling, brooding guitars in the manner of his classic Black Sheets of Rain album. It’s a mood that suits him greatly, yet one he doesn’t pursue. After the smouldering of the opening track, the album catches fire with the breakneck paced, pounding “Little Glass Pill”.  Based on the evidence of these two tracks, Mould is not about to shuffle quietly off into mellow reflection.

The pace doesn’t let up with rabble-rousers “Kid With Crooked Face”, “Hey Mr. Grey” and “Tomorrow Morning” barreling along, barely keeping up with themselves. “I Don’t Know You Anymore” takes a classic Ramones chord sequence, slows it down and makes it sound effortless, while “Nemeses Are Laughing” and “The War” are in the vein of his ‘90s Sugar material.

Breezy strum “Forgiveness” and “Let The Beauty Be” are more relaxed than anything else here, acting as a breather on a fast, hard-rocking album, one which concludes with a final blast of energy in “Fix It”.

Dismiss this one at your peril. Although it’s nothing new for Bob Mould and it certainly doesn’t scale the heights of Husker Dü, Sugar or his early solo material, it may well be his best collection of songs in fifteen years.

Flying the flag for Spill Magazine in northern Europe, Killian has been reviewing albums in his head from an early age. Very much a part-time member of the team, loves a bit of guitar, but no fretwa**k.
RELATED ARTICLES
album reviewsbob mould
8.0