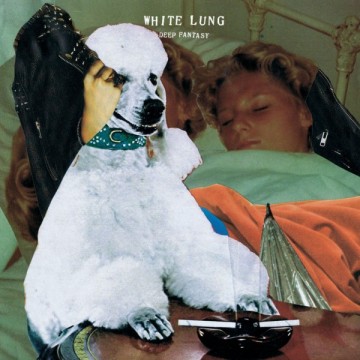 Hailing from Vancouver, White Lung showcases that a group of three women (and their male guitarist) can create superior punk tunes in a male-dominated field of the music industry. Expect strong vocals that aggressively overthrow the stereotypical female voice and intricate, hard, and heavy instrumentals.

White Lung creates tunes that are reminiscent of old school punk, with some hardcore flare. The album artwork of Deep Fantasy is an erratic and wild Photoshop mash up which translates the energy White Lung puts into writing and performing their music.

Check out tracks “Down It Goes” and “Sycophant”.

Emily Fin is an illustration student at OCAD University in Toronto. She really digs the many sub-genres of punk music and dogs. You can scope out her artwork at romaniranch.tumblr.com.
RELATED ARTICLES
album reviewswhite lung
8.0