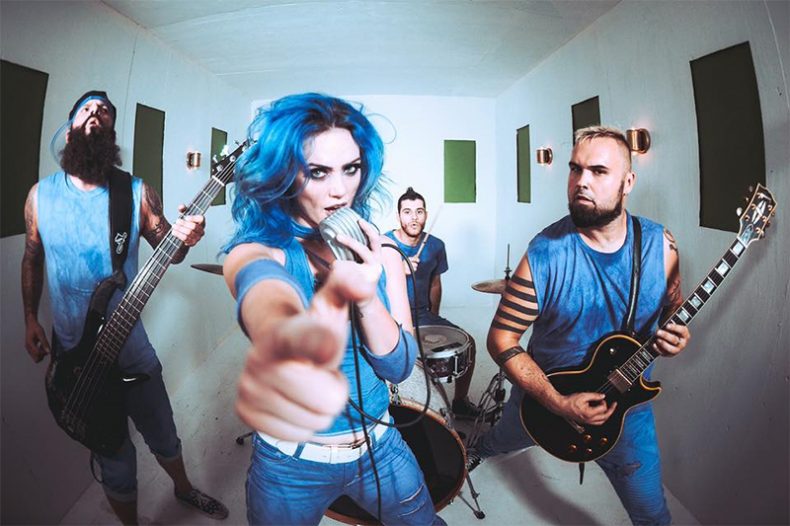 A CONVERSATION WITH SKYE “SEVER” SWEETNAM OF SUMO CYCO

In what has been an unprecedented year for an unsigned band, Sumo Cyco is rewriting the possibilities for independent artists worldwide. Having released their second album, Opus Mar, in March, the band continue to perform across North America, Europe, and a tour of New Zealand just over a month ago. They have released a string of music videos (including “Move Mountains”, the album’s lead single featuring Benji Webbe and a cover of Dua Lip’s “New Rules”), and most recently, a music video for their latest single, “Sleep Tight”. In celebration of the band’s music video release and upcoming acoustic album, Live Acoustic Sessions VOL. 1, I had the chance to talk with lead vocalist Skye “Sever” Sweetnam to discuss Sumo Cyco’s big year.

Standing confidently somewhere sonically in between No Doubt and Avenged Sevenfold, Opus Mar is an extension of the incredibly unique sound and identity that Sumo Cyco has carved out for themselves. The album features influences of ska, dancehall, and pop underneath a heavy and hard-hitting metal tone. “Sleep Tight” is no different and its video- like the rest of Sumo Cyco’s music videos- acts as the perfect visual representation for the track. The premise behind the video has its roots in the band’s 2014 release, Lost In Cyco City, where the band created their own worlds centred in Cyco City. Opus Mar picks up as a train that is leaving Cyco City -with the skyline from the first album visible in the background of the front cover of Opus Mar– with “Sleep Tight”- like the other videos for the album- taking place in a car on the train.  Speaking about the creative process behind the music video for “Sleep Tight”, she proudly exclaimed that everything the band does is done in a completely DIY manner, stating that “typically me and guitarist Matt Drake will come up with an idea and make the other two band members do whatever we like”. Going further, she explained “our bassist, Kenny Corke, is a hilarious improviser. He’ll run with any character”. In the case of “Sleep Tight”, he can be seen being carried in the arms of the Terrornaught – a recurring character with the charm of Iron Maiden’s Eddie. Sweetnam designed the costume for Corke – an inspiration from inflatable Halloween costumes- making him the star of video. 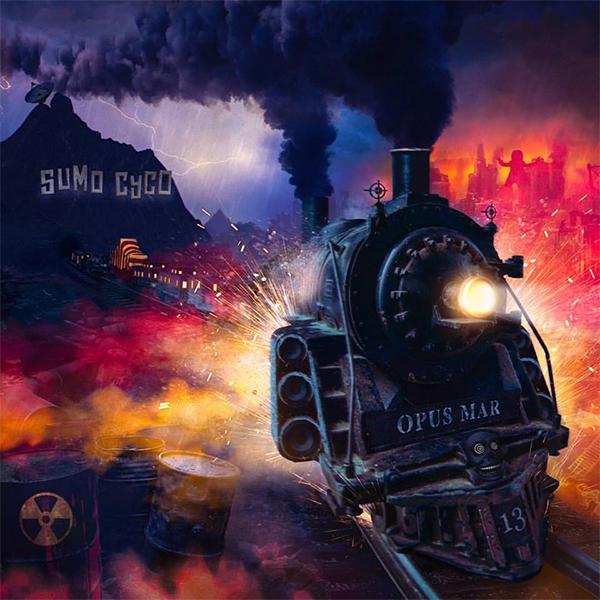 LISTEN TO OPUS MAR AT SPOTIFY

The DIY approach that Sweetnam and Sumo Cyco incorporate is nothing short of inspirational to independent musicians everywhere. Sweetnam herself admits to always looking for new things to incorporate in their work, especially within their videos, to keep the engine that runs Sumo Cyco running constantly at full speed, “I love the romanticization of the old industry where it was all about the music and you could just be awesome at vocals to get discovered, but that’s not the case, so to be where I want to be, I can’t avoid what I need to do to get there”. A quick look through their social media feeds for the last month- let alone the last year- is a testament to that. This makes “Sleep Tight”- and every other Sumo Cyco video for that matter- even more impressive. From the vibrant colours, seamless and subtle animation, smooth editing, and use of props and set design, “Sleep Tight” has a music video that can go toe to toe with some of rock’s biggest names and stand tall as the better and more creative visual experience.

As Sumo Cyco continues into 2018, the band is banking on a year that builds on their success. The band will begin to work on their follow-up record to Opus Mar and plans to perform across the globe, most likely in Europe and America. Interestingly enough, Sumo Cyco have yet to tour across Canada. Having only performed across Ontario and making their way up to Montreal, 2018 may be the year that they travel across their home country. Regardless, the new year is bound to be yet another major step forward for the independent band but fret not, Sweetnam is quick to mention that 2017 isn’t over yet. Live Acoustic Sessions Vol. 1, their collection of six songs stripped down to the bone, was out on December 15th.

A passion for music has always been a part of Gerrod’s life. As a young boy, he was raised on a steady diet of the music from The Chili Peppers, Aerosmith, The Stones, Prince, and others from his mum. Raised in the GTA, Gerrod continued to foster his love for music by attending a wide range of concerts and learning the drums. His unapologetic passion for music has no bounds and has spread to a wide variety of styles, whether it be the 90’s rock that sound tracked his teenage years, the jazz he studied in university, or his newfound love for hip-hop. He recently received his bachelors in music and education from York University and is passionate about writing and reviewing good (and less than good) music. Gerrod is also the drummer and songwriter for a Toronto based rock & roll band, One In The Chamber.
RELATED ARTICLES
featuressumo cyco