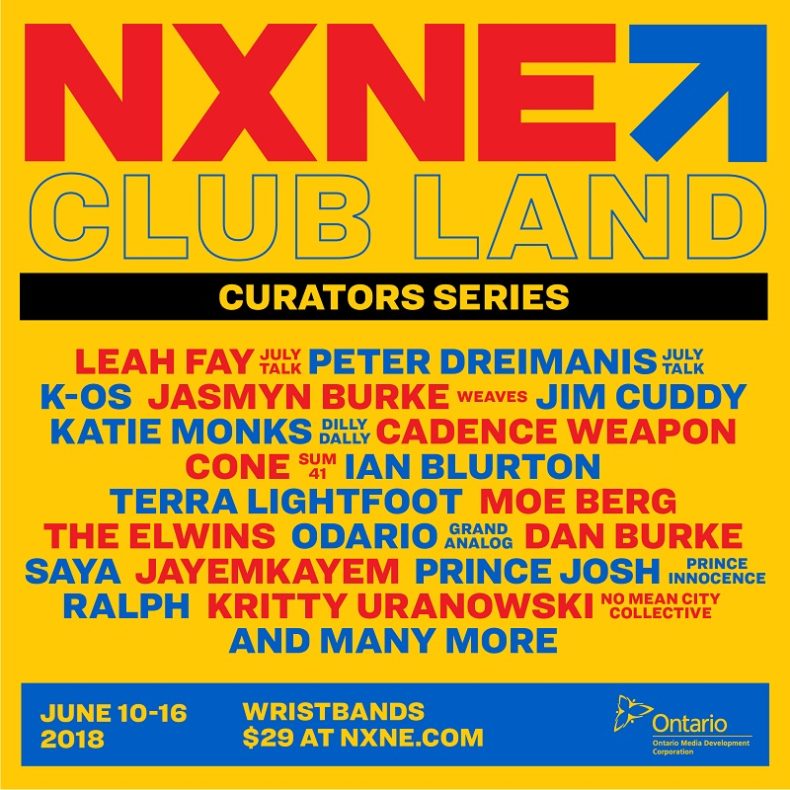 NXNE announces the 2018 Club Land Curators and second edition of Game Land. The Club Land Curator series returns from June 10-16 at participating venues across Toronto’s downtown core with Game Land once again kicking off the festival June 8-10, at The Concert Hall (888 Yonge St).

“We’re thrilled to have top Canadian artists share the spotlight with up-and-coming acts that they believe in. We think this is a great refresh for the club hopping wristband that has been an essential part of NXNE since 1995,” states Michael Hollett, NXNE Founder / President.

The Club Land Curators Series, programmed by leading Canadian musicians, has expanded with over 30 shows throughout the festival week. Club crawlers can look forward to a diverse range of programming including art installations, emerging artist showcases, late night DJ sets and after parties, all in Toronto’s most cherished venues. The Curator series aims to encourage music fans alike to club hop across the city and witness their favourite artists transform the showcase experience. Get priority access to all shows with an affordable NXNE wristband. For tickets visit here.

The three-day live eSports extravaganza will have hundreds in attendance and tens of thousands viewing online via NXNE’s  twitch channel. The free event is open to the public and will feature an Exhibitor zone, public gaming stations for DBZF, SFV, and Smash Bros., and a VIP Lounge where top players, musicians, influencers and leaders will come together to play and compete in the opening weekend events.”NXNE has celebrated new and exciting industries since its inception and this year we’re building on that. With the inaugural Game Land last year, we ushered the burgeoning esports and gaming worlds into the heart of Toronto, and look forward to continuing to bridge the gap between casual and veteran gamers, by inviting everyone to come check out the 2018 edition,” Michael Hollett, NXNE Founder and President shares.

With some of the most intense no-holds-barred fighting game action currently out there it’s sure to be an entertaining event for both viewers/attendees in person, but online as well. Registration is available here. For more info visit here.

Stay tuned for further announcements on programming, including this year’s festival village line-up at YDS June 15-17.

SPILL NEWS strives to keep our readers up to date with news and events in the music industry. We keep you informed of the most recent information regarding new releases, tour dates, and information items about your favourite artists.
RELATED ARTICLES
cadence weaponjim cuddyjuly talk