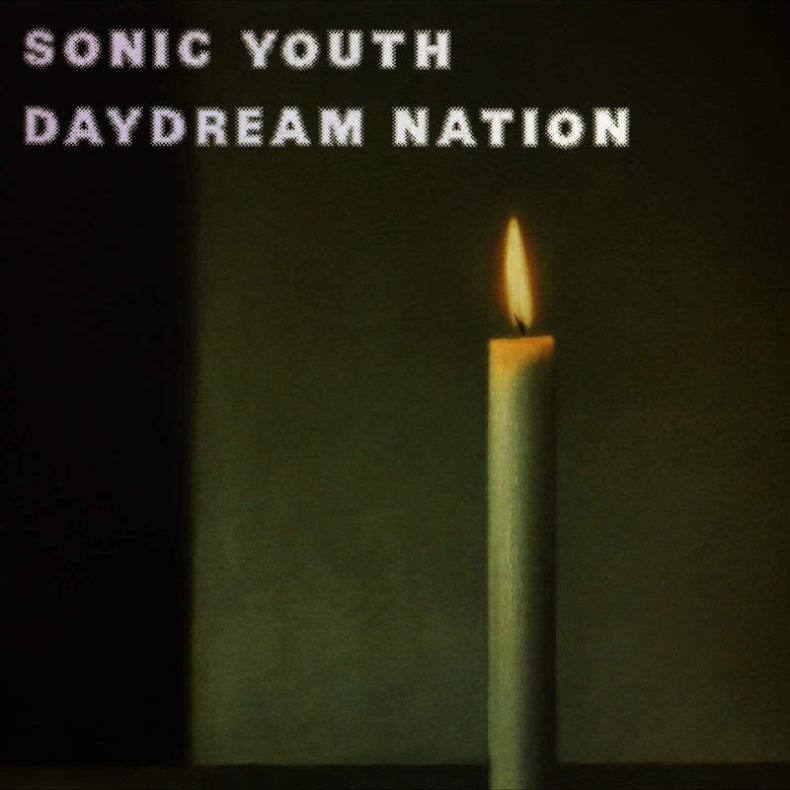 New York City in the late 1970s was the creative haven for any hipster looking to have a go at a real bohemian lifestyle. Punk rock was at its peak, having gained its roots in the city a decade earlier. The art scene was about to spawn the world such talents as Keith Haring and Jean-Michel Basquiat, while the early seeds of hip-hop were being planted by DJ Kool Herc and Grandmaster Flash.

Out of the madness that was Manhattan at the time sprung Sonic Youth, a magical four-piece band that would define the terms “indie” or “alternative” a decade before the terms even existed.

“I lived about an hour and a half away in a small town in in Connecticut,” said Sonic Youth guitarist/vocalist Thurston Moore. “I became aware of music in New York that was interesting to me by reading rock magazines. I really was interested in more radical expressions, as far as rock ‘n’ roll was concerned. There was this whole scene of music that was called No Wave. It was just atonal, violent guitar rhythm music with lyrics that were about really alien concerns.”

The sounds of the Brian Eno produced No New York was seminal for the early formation of No Wave and of course to Sonic Youth. The compilation featured such avant garde acts as James Chance & the Contortions, D.N.A. and Teenage Jesus & the Jerks. Taking punk one step further, these artists fused anything from jazz to ambient noise to create disturbingly dissonant sounds.

Kim Gordon, a local guitarist & bassist on the scene, was introduced to Thurston Moore backstage after one of his shows. The two musicians talked about their influences, both sharing a love of the Velvet Underground and Talking Heads. Not long after that the two were living together in her 13th floor Eldridge Street apartment, struggling to afford cigarettes and make rent. 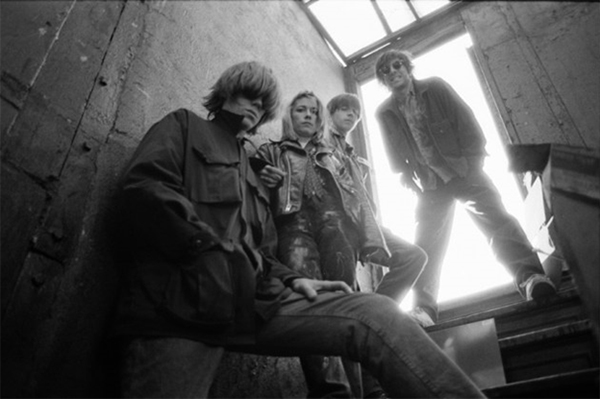 “I asked Kim to play on this thing that I was starting to do,” wrote Moore in an article with Vulture. “I knew Lee [Ranaldo] from a couple of other bands, and I asked Lee to play with us, because I thought he was really interesting and we really connected. We called ourselves Sonic Youth and our first gigs were at The Kitchen.”

Before the entrance of drummer Richard Edson, each group member would take turns on percussion.

The band’s early sound was heavily influenced by the Velvet Underground as well as the local No Wave artists drifting the clubs of New York. One of the key influences though was Glen Branca, a patron of the new underground scene. His alternative single note tunings (also used by Lou Reed in the Velvet Underground) became the key sound to the guitar playing in Sonic Youth.  By using these alternative tunings, both Thurston Moore and Lee Ranaldo began using new techniques to approaching their instrument. Drumsticks and power drills often took the place of a guitar pick to get the band the sound they were searching for.

Sonic Youth’s self-titled debut EP was released in 1982 on Branca’s Neutral Records. From the little coverage it did get, all was negative. After the EP dropped, drummer Richard Edson departed to pursue career in acting; later starring in such films as Stranger than Paradise and Ferris Bueller’s Day Off.

He was quickly replaced with drummer Bob Bert, who remained with the band for the next three years until they clicked with Steve Shelley, who would remain a permanent fixture in the group.

For the next several years, Sonic Youth continued to find their sound while experimenting with avant-garde fuelled noise rock. The band produced an album every year and toured relentlessly, honing their craft. Despite all of the group’s drudgery, their efforts were both ignored by critics as well as record buyers.

Having signed to legendary punk label SST the year before, Sonic Youth began working in early 1987 on what was to become Sister. The sound heard on their new compositions consisted less of frantic playing in favour of a more refined style. While still using bizarre guitar tunings and other unorthodox type instrumentation, the indie pioneers began to explore the use of melody and even acoustic instrumentation on a few tracks.

When the album was released later on in the year, it was praised by critics, most notably Robert Christgau whose magazine The Village Voice ranked it 12th best album of the year. Despite the critical praise this time around, most people still didn’t know who the hell Sonic Youth was.

Nevertheless, it was the music that was the achievement and not the popularity. Tracks like “Schizophrenia”, “(I Got A) Catholic Block”, and “Tuff Gnarl” gave the small fan base that they had that something to look forward.

When they were ready to get back to the studio the following year, they intended on bettering their efforts. After being urged by former Black Flag frontman, Henry Rollins, they decided to capture the essence of their live sound. Often in concert, they would drone on in a song for an extended period of time, creating an orchestra of noise that was both hypnotic and vile. With their newfound taste for melody, the alt-rock pioneers fused elegant melodies with a raw ugliness that sounded like a screeching New York subway.

The band entered Greene Street studios in the summer of 1988 to begin laying down tracks to what would be Daydream Nation. Nick Sansano was chosen as producer of the sessions, despite his lack of knowledge of the band. His previous experience had come from hip-hop artists like Public Enemy and Rob Base & DJ EZ Rock. Despite the producer’s lack of experience with more rock-based music, the sessions went by smoothly, seeing the band record over two LPs worth of material in only three weeks. 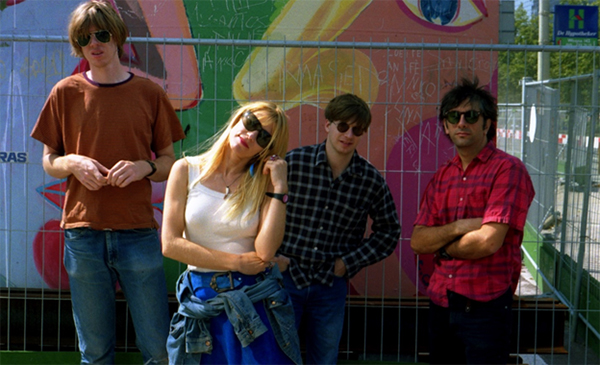 SONIC YOUTH IN THE YEAR THAT PUNK BROKE, 1991

The concept of the double album was seen as quite passé by the late 1980s, especially in the underground scene. The entire idea screamed of bloated arena rock from the decade prior. But Sonic Youth saw an opportunity to break the punk stereotype by releasing their masterpiece in its entirety. This was a flipped middle finger to all the dilettante punks who only subscribed to the 2-minute or less ideology. In a sense, Sonic Youth out-punked the punks.

Daydream Nation did not chart at all in the U.S. when it was released on October 18, 1988. However, the critical praise was unanimous with magazines such as Billboard and Rolling Stone praising the group’s genius. It was quickly lumped in as one of the best recordings of its kind along with Hüsker Dü’s Zen Arcade and Minutemen’s Double Nickles on the Dime.

“By the time they got to Daydream Nation it was a revelation,” said Glenn Branca in the documentary, 20 Years of Sonic Youth. “That record was one of the greatest, most beautiful records I’ve ever heard.”

Tracks like “Silver Rocket” and “Cross the Breeze” prove that Sonic Youth still had a perverse edge, but this time around there was more maturity in the songwriting. The structure of both tunes maintains a sense of hard-core punk, yet bringing an intelligence of Phillip Glass to the composition.

Sonic Youth also brought a pop sensibility to the album with tracks like “Total Trash” and album opener, “Teenage Riot”. The latter has perhaps become their most well-known track. It is easily one of their most accessible songs and also happens to give a first time listener a great sense of the band. Combining both melodic dissonance with proto-grunge like guitar playing, “Teenage Riot” captured everything that Sonic Youth stood for.

Despite the exploration into pop orientation, Sonic Youth was continuing to test the waters. “Providence”, a spoken-word piece, features audio from a message Minutemen bassist Mike Watt left on Thurston Moore’s answering machine. The audio was used and combined with haunting chords played on an out of tune piano. The sound of Moore’s amplifier overheating was also captured for the song. The track is arguably one of the most interesting experiments in their entire catalogue.

Lyrically, the album is all over the map blending everything from dystopian sci-fi worlds to borrowing dialogue from Andy Warhol’s film, Chelsea Girls.

The album art was also something new for the band. On Daydream Nation they chose to use the painting “Kerze” (“Candle”) by German artist Gerhard Richter. Featuring a lit taper candle against an emerald background, the overall effect was subtle. Whereas Sonic Youth’s past covers were more in your face, the cover for Daydream was thought provoking.

Following the release of their most recent critical darling, the band was offered a contract with Geffen Records, the band’s first major label deal. 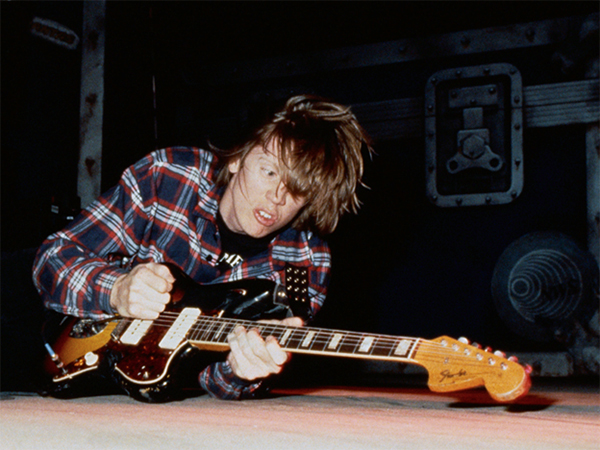 Gordon’s connections at Geffen Records also helped the then unknown act, Nirvana score a contract with the major label as well.

In 1990, Sonic Youth released Goo, which continued the groups’ artistic growth that began with Daydream. Featuring classics like “Dirty Boots” and “Kool Thing”, Goo became a staple in the burgeoning alternative scene of the early ‘90s.

“When we signed with Geffen it changed everything and nothing,” said drummer Steve Shelley in 20 Years of Sonic Youth. “Now we had money to work with to go to a studio and spend a few dollars as opposed to the usual indie rock album budget. But at the same time we did business the same way that we always did. We booked our own tours, we selected all of the groups that we played with. We kept a very indie rock mindset after we hooked up with Geffen.”

From then on, Sonic Youth remained the top indie band producing consistent work of quality until they disbanded suddenly in 2011, after Kim Gordon and Thurston Moore separated. Still as good as their releases were in the ‘90s and 21st century, they were never quite able to reach the artistic heights that they had on Daydream Nation.

“Daydream Nation made alt-rock a life force,” wrote Robert Christgau in his 2007 review of the albums’ deluxe edition. “Over two vinyl discs containing just fourteen titles, it fused Sonic Youth’s displaced guitar tunings with tunes as hummable as the Beatles’ or the Ramones’ — a standard they’ve matched ever since, but never again with quite so much anthemic consistency.”

Just like the candle on its cover, Daydream Nation will burn forever.

As a child growing up in the suburbs, Ryan found music as a way to soothe his boredom. After first hearing AC/DC at the age of 10, he was hooked on music. Tracing its roots to the ‘50s, he became obsessed with Elvis, Buddy Holly and Chuck Berry. Somehow that led to grunge, then psych-rock, then jazz, etc. The list goes on and on and his collection of vinyl records continues to grow.
RELATED ARTICLES
featuressonic youth