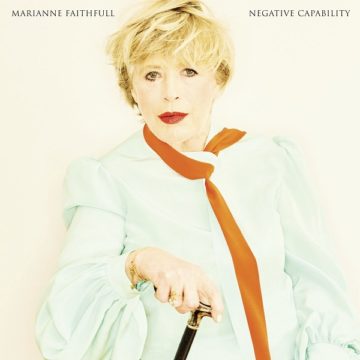 Marianne Faithfull will turn 72 in December, and, like many artists her age and of her generation, she continues to do what she does best while still pushing boundaries. Since her debut performance in 1964 (her debut album was released in 1965),she has continued to release thought-provoking, groundbreaking albums. Negative Capability is her 20th studio album, and her first release since 2014’s beautiful Give My Love To London. Here, on Negative Capability, she is saying goodbye to friends, coping with old age, poor health, addressing terrorism, and realizing her own mortality. It is a wonderful album.

“I know I’m not young, and I’m damaged/But I’m still pretty, kinda funny,” Faithfull sings in “In My Own Particular Way”. A bold and harsh statement, but she follows it up with “I am ready to love”. The fear is, will someone love her back? It is set against some of the most beautiful  music being produced today. Beautifully layered, melodic, almost wistful music, as she faces down her own demons. This is typical of many of the songs on the album. A personal account of her life.

The album is produced by long time collaborator Rob Ellis (who produced her last five studio albums) and Warren Ellis (from The Bad Seeds). Warren Ellis also provides violin throughout the album and his boss, Nick Cave, performs an incredible duet with Faithfull “The Gypsy Faerie Queen”, which is an absolute stunning song. Cave co-wrote it with Faithfull, and they two of them together produce a staggeringly beautiful sound.

Other guests on the album include Ed Harcourt and Mark Lanegan, and both add a great deal. Listen to “New Moon In Paris”, co-written with Harcourt. It is a song about Faithfull looking back on her life. It has the same impact as Cash covering “Hurt”. It is absolutely painful, honest and one of the most moving songs I have heard this year. This follows the song, “They Come At Night” about the attacks in Paris.

She does some interesting covers on the album. Dylan’s “It’s All Over Now, Baby Blue” gets the Faithfull treatment, and it is fine. She covers “As Tears Go By”, a song she took to the top of the charts in 1965. Here, it becomes more of a dirge and an almost funeral song. Finally, she takes “Witches” from the brilliant Broken English and it is actually a better version than on the original album. A rare feat.

Faithfull’s voice is as good as ever, and her writing has gotten better with age. The album may not be the most original album released this year, but it is one of the most personal and honest  albums released this year and perhaps of her career. It is refreshing that an artist of her stature can continue to grow and deliver very strong and emotional music.

Born and raised in Whitby, Aaron discovered music through his love of The Beatles. This led to a career in radio, writing for various publications, and ultimately a radio show about The Beatles (Beatles Universe), which ran for over four years. When not immersed in music, Aaron enjoys spending time with the loves of his life -- his wife Andrea, and daughters Emily and Linda (all of whom have an intense love of music too).
RELATED ARTICLES
album reviewalbum reviewsnick cave
8.0