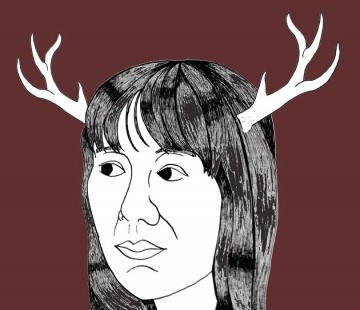 By turns cuddly and chaotic, San Francisco’s Deerhoof mix noise, sugary melodies, and an experimental spirit into sweetly challenging and utterly distinctive music that made them one of the most acclaimed acts of the 2000s and 2010s. The group began as the brainchild of guitarist Rob Fisk and drummer/keyboardist Greg Saunier in 1994; early releases, such as the 1995 7″s Return of the Woods M’Lady and For Those of Us on Foot, had a more traditionally harsh, no wave-inspired sound, though they also included the quirky tendencies that dominated their later efforts. Vocalist/bassist Satomi Matsuzaki joined the group in time for 1996’s self-titled double 7″ on Menlo Park, but other members passed through Deerhoof, including Chris Cooper of Angst Hase Pfeffer Nase. The following year they released their full-length debut, The Man, the King, the Girl, on Kill Rock Stars, and the Come See the Duck 7″ arrived on Banano a year later.

Fisk left Deerhoof after 1999’s Holdy Paws, an experiment that saw the band trying to write songs that favored composition over individual sounds, and pursued similar ideas in his solo work and in Badgerlore. Halfbird, which was recorded before Fisk departed, was released in 2001, after John Dieterich was recruited as Deerhoof’s new guitarist. That year the group also released the My Pal Foot Foot 7″, a cover of the legendary Shaggs song that also appeared on the Better Than the Beatles tribute. In 2002, the group released the critically acclaimed Reveille; 2003’s Apple O’ followed soon after, and also featured auxiliary guitarist Chris Cohen. Their fifth album, the more cohesive and focused Milk Man, appeared in spring 2004. The following year was another busy one for the band: not only did they embark on tours of the U.S., Europe, and Japan, but they released the Green Cosmos EP, the full-length Runners Four, and a Deerhoof tribute album that was only available on the band’s website.

In 2006, the group toured with the Flaming Lips, the Fiery Furnaces, and Mary Timony, among others. That spring, Cohen left Deerhoof to concentrate on the Curtains, and that fall, a ballet based on Milk Man was performed in North Haven, Maine. During that time, the band recorded its own songs and collaborated with composer Ed Shearmur on the music for Dedication, a film directed by Justin Theroux. The concise yet eclectic Friend Opportunity arrived in early 2007. Guitarist Ed Rodriguez joined the band in early 2008, and played on that year’s Offend Maggie; prior to the album’s release that fall, the band gave away one of its songs, “Fresh Born,” as sheet music so fans could make their own versions of the song. Starting in 2010, Deerhoof began leaking songs from their next album on different media outlets, creating a kind of musical scavenger hunt for fans leading up to the 2011 release of their tenth studio album, Deerhoof vs. Evil. The band’s 11th album, Breakup Song, another short and sweet set of songs like Friend Opportunity, appeared in September 2012. The band celebrated its 20th anniversary with the release of 2014’s La Isla Bonita, a set of songs inspired by the Ramones’ punchy punk and recorded in just a week. The following year, Deerhoof released their first live album, Fever 121614, which captured a Tokyo date on the La Isla Bonita tour.

Daniel is an illustrator/graphic designer based out of Austin Texas. He graduated from Pratt Institute with a Bachelors degree in Illustration and an Associates degree in Graphic Design. Daniel started his career in graphic design in the world of online casinos. Since then he’s worked with various clients from around the United States and Canada including but not limited to NHL, Subway, Paraco Propane, Pitney Bowes, Xerox, Conduent, Nestle Waters, The Spill Magazine, Stamford CT’s DSSD, Beechnut Baby Foods, Elizabeth Arden and much more.
RELATED ARTICLES
daniel adamsdeerhoofportraits