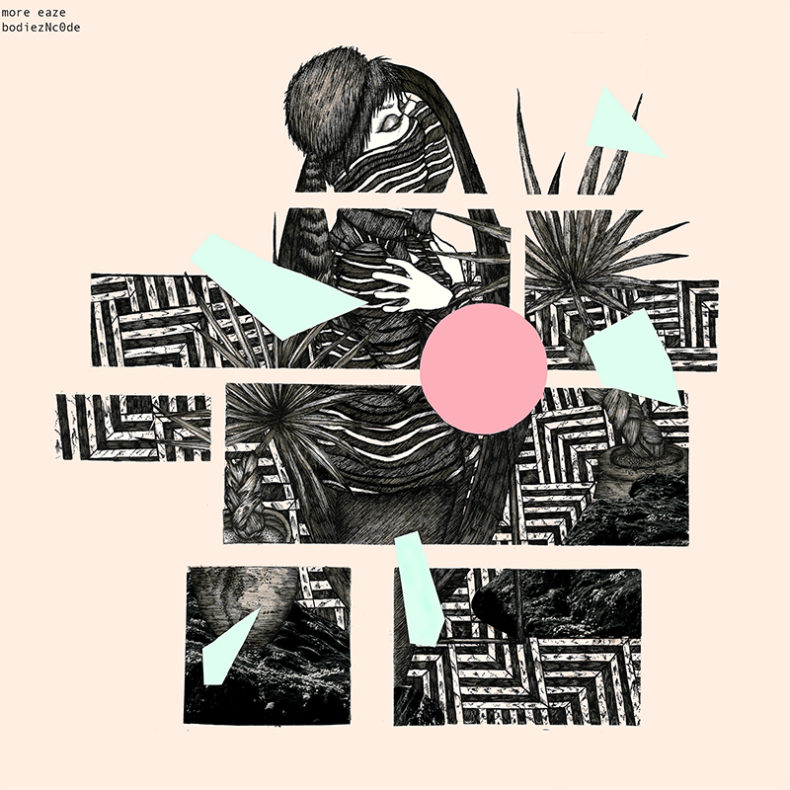 bodiezNc0de, the latest album from prolific performer, composer & producer More Eaze (aka Marcus Maurice aka Marcus Rubio), is a combination of pop-oriented songwriting, process/generative compositional techniques and careful production. Simultaneously guarded & open, More Eaze’s personal lyrics address subjects as varied as the abstraction of the body, the resilience of forms and even the political disagreements between parents & their children. The music mirrors the subject matter, its emotive melodies complemented with warm strings, rhythms both languid & insistent, juxtaposed with & sometimes broken up by a variety of electronic jabs & waves. Performers on the album include Slug Christ (on “i don’t care”), Thor Harris, Dane Rousay and more. Recorded by Marcus in his home as well as at Estuary Recording Facility (Austin TX) with Evan Kaspar.

Marcus Rubio says about the release, “bodiezNc0de is one of the most personal releases I’ve made so far in many ways but it is also the first more eaze release to feature a pretty big list of collaborators and performers. a good bulk of the album grew from a solo laptop/guitar/violin set I was performing pretty regularly and then eventually brought to a band.   in many ways, it is an attempt to illustrate my belief that no piece of music is “fixed” and to create songs that rely equally on structure and chaos allowing forms to emerge gradually.  I was particularly excited to work with slug christ and thor harris on some of these tracks because their music has a similar dichotomy to it and both of them made essential contributions to the record. both of their work also deals with anxiety, sadness, and humor in a way that strongly impacted much of the record’s atmosphere.”

by SPILL NEW MUSIC on July 30, 2020
ELBOW’S FIRST THREE ALBUMS TO BE REISSUED ON VINYL SEPTEMBER 25 POLYDOR RECORDS elbow fans will be able to own the band’s [...]