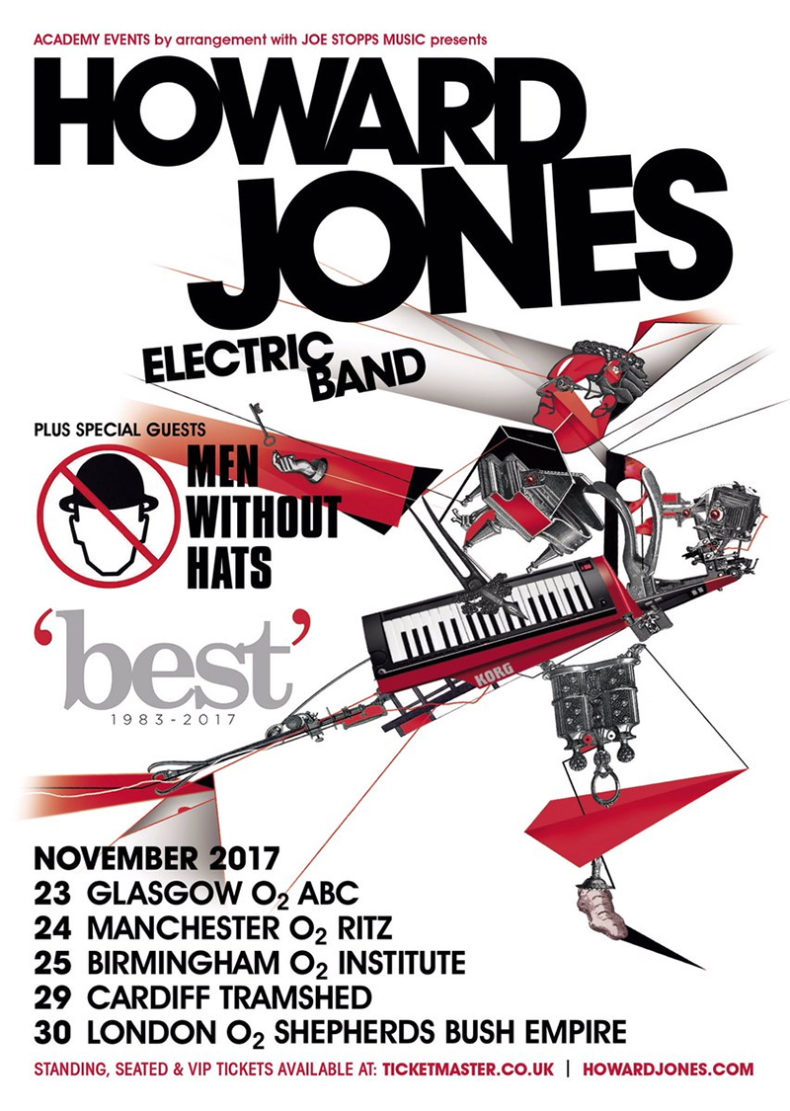 Howard Jones returns for a UK tour in November, his first since 2014, with his new and extended Electric Band; following a 24 date Headline tour of the USA.

The tour will also coincide with a brand new ‘Best Of’ Howard Jones release Entitled ‘BEST (1983-2017)‘. Audiences can expect to hear many of Howard’s chart topping singles as well as new songs that featured in the recent Eddie the Eagle film (2016) and his 2015 multi-media ‘ENGAGE’ project.

It was in 1983 that multi-instrumentalist Howard Jones first burst onto the contemporary music scene with his very British songwriting, pioneering synthesizers and thought provoking lyrics. He set out his manifesto in his very first single ‘New Song’ where the lyrics called on the listener to challenge their preconceived ideas, to see both sides and “throw off your mental chains”.

Along with ‘New Song’, his first two albums, the twice Platinum, Number 1 selling Human’s Lib (1984) and Dream into Action, the Gold selling record that peaked at Number 2 in 1985, brought Howard a host of Top 10 hits including ‘Things Can Only Get Better’, ‘What Is Love?’, ‘Pearl in the Shell’, ‘Like to Get to Know You Well’, ‘Hide and Seek’, ‘Look Mama’ and ‘No One Is To Blame’, which reached Number 1 in the USA. He also performed at Live Aid (Wembley Stadium) in 1985.

A few years later, they said the world would “Go Pop” — and it did.

Men Without Hats have been creating iconic, irresistible music for more than three decades, and, logging literally thousands of touring miles over the years, have honed their live set to a sonically dynamic, thought-provoking dance party, winning over millions of fans in the process.

Led by charismatic front man/lead singer/songwriter Ivan Doroschuk, MWH has surged back into the public eye, beginning with a breakout show at 2011’s SXSW, and followed first by the release of their seventh album, Love in the Age of War, and then by extensive, well-received tours throughout North America and across the world in the years since.

Along with keyboard players Lou Dawson and Rachel Ashmore, plus guitarist Sho Murray, Ivan and the ’Hats have been delivering high-energy shows packed with all of the band’s absurdly catchy lyrics and melodies, as well as great tracks from their new release, which picks up precisely where the hit-makers left off.

“Sure, lots has changed in music over the last few decades,” says Doroschuk, “but the world still loves a hooky song with a bit of edge that can get you thinking.”

And that’s always been what the ’Hats deliver: tracks that get you bopping across the dance floor with subtle messages that haunt you long after the music has ended.

It’s no surprise that this band has topped charts all over the world, and even picked up a 1983 Grammy nomination for Best Group.

The Hats’ catalogue sounds as fresh and relevant as ever, and their hits have been featured on The Simpsons, Family Guy, and Glee. Their hit single, “Pop Goes the World,” also lights up TV screens in a commercial for Tide.

Men Without Hats have been providing a hit- and hook-filled soundtrack to our lives since the 80s, and now the band powers magnificently into the 21st Century with a fantastic new album and a summer tour through the U.S., Canada, and beyond.

They once said you could “dance if you want to,” but these days, audiences at Men Without Hats shows usually can’t stop themselves, anyway.

SPILL NEWS strives to keep our readers up to date with news and events in the music industry. We keep you informed of the most recent information regarding new releases, tour dates, and information items about your favourite artists.
RELATED ARTICLES
best (1983-2017)electric band tourhoward jones

SPILL FEATURE: LIKE TO GET TO KNOW YOU WELL – A CONVERSATION WITH HOWARD JONES