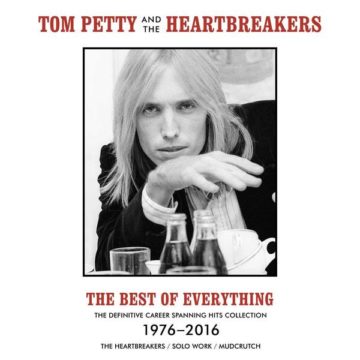 Tom Petty And The Heartbreakers
The Best Of Everything
Universal

Just over six months following the release of the massive career anthology An American Treasure, which featured an abundatnce of never before heard material, the Tom Petty estate has released his second posthumous collection, The Best Of Everything. While this too is another compilation album which pays tribute to one of America’s greatest songwriters, it feels like more like a streamlined and standard greatest hits album, whereas the appropriately titled An American Treasure was a box set which focused on Petty’s hits along with unreleased songs, demos, alternate cuts, and live tracks. In comparison, The Best Of Everything may seem like much less, but it serves as a more accessible, albeit far less grand, collection of Petty’s hits for a more casual audience, while also being an excellent point of entry into Petty’s career for those unfamiliar with his work. Ultimately, however, it is yet another reminder of the absence of Petty’s voice, writing, and subtle social commentary.

Upon opening with “Free Fallin’”, followed by “Mary Jane’s Last Dance”, The Best Of Everything stands as a fairly standard greatest hits. The double disc collection includes all of Petty’s biggest commercial hits such as “Refugee”, “American Girl”, “I Won’t Back Down”, “Runnin’ Down A Dream”, “Wildflowers” and his quintessential duet with Stevie Nicks “Stop Draggin’ My Heart Around”, among others. The album even includes more recent tracks like “I Should Have Known It” and “American Dream Plan B”, making it a true career spanning collection of the singles which defined Petty’s career. Quite curiously, however, the album includes a number of lesser known singles, deep tracks, and songs from Mudcrutch, including “Scare Easy”, “Trailer”, “Room At The Top”, and “Angel Dream (No. 2)” along with a handful of others.

The Best Of Everything includes an unreleased, alternate version of “The Best Of Everything”. Originally released in 1985 as the closing track for Southern Accents, the new cut sounds re-mastered, features an additional verse, and sounds more like Petty & The Heartbreakers than the original version as the synths are substituted with a warm piano from Benmont Tench as well as Mike Campbell’s guitar solo sounding much bigger and more climatic. As much as Southern Accents stands among Petty’s most ambitious works, I’m curious if, like “The Best Of Everything”, there is an alternative cut which feels and sounds more organic.

Closing the album is the only truly unreleased song, “For Real”. The stark track follows Petty as I imagine he looked back at his career – perhaps this was an outtake for what would become his final studio album, 2014’s stellar Hypnotic Eye – and exclaiming that he did it all for himself; his creative drive, his passion, his desire to be a musician and for nothing or no one else. Now to be clear, there was never a point, ever, in his forty year career where any fan would have doubted this; Petty’s discography has always shined bright with a rich sense of integrity. What makes “For Real” incredibly poignant is that it is the message we needed to hear; it is the message we had to be reminded of for our own sake. Even today, we could all take a lesson from Petty and “For Real” alone takes The Best Of Everything to a whole different level.

With the inclusion of such hits and lesser known tracks, The Best Of Everything delivers a strong series of hits along with a number of songs which the more casual listeners may not have heard, creating a sense of intrigue and a want to dig through Petty’s eclectic discography. While, as a whole, it may not offer much new content for the lifelong collectors, especially those who picked up An American Treasure, the inclusion of “The Best Of Everything (Alt. Version)” and especially “For Real” should make The Best Of Everything far more enticing. That being said, while it isn’t known as to how much unreleased material there is, I do hope that his family and band shift their attention to a reissue to 1994’s Wildflowers with the unreleased second disc which Petty publically discussed releasing shortly before embarking on his 40th Anniversary Tour in the summer of 2016.

A passion for music has always been a part of Gerrod’s life. As a young boy, he was raised on a steady diet of the music from The Chili Peppers, Aerosmith, The Stones, Prince, and others from his mum. Raised in the GTA, Gerrod continued to foster his love for music by attending a wide range of concerts and learning the drums. His unapologetic passion for music has no bounds and has spread to a wide variety of styles, whether it be the 90’s rock that sound tracked his teenage years, the jazz he studied in university, or his newfound love for hip-hop. He recently received his bachelors in music and education from York University and is passionate about writing and reviewing good (and less than good) music. Gerrod is also the drummer and songwriter for a Toronto based rock & roll band, One In The Chamber.
RELATED ARTICLES
album reviewalbum reviewstom petty
10