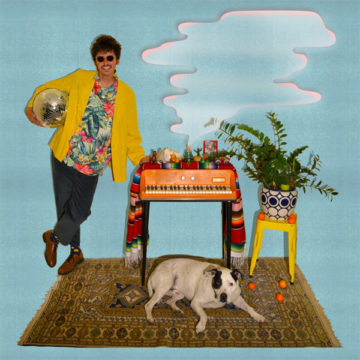 Los Angeles musician Jonny Kosmo releases his debut album, a collection of disco-tinged psychedelia and funky ‘80s-esque bass. Fresh off a stint as a member of local psych pop band Mr. Elevator, Kosmo features a host of names on this self-titled debut, including Kassie Carlson of Guerilla Toss.

Kosmo’s songs range from Strawberry Alarm Clock ‘60s groove (“Come Down to Get Down”) to Carlson reciting a poem about a dog (“Strawberry Vision”). Most of the lyrics are drenched in reverb, and assisted by that funky bass, they offer shoegazing lyrics. There are highlights, however; “Jessica Triangle” features a dreamy, far-away island feeling, led by a smooth saxophone and great harmonies, and “Circus of Dreams” manages to be hypnotic in its dreamy riff, and is elevated by brass, almost like a psychedelic painting.

The album’s failing is its repetitive nature, as most of the songs rely on the same beat, and the same hypnotic vocals. While there are quite a few great moments, the same beat and vocals get tiresome after the first song and half the album runs together. Kosmo goes for a disco beat, which seems to be popular with psych pop these days.

Aside from the highlights, Kosmo’s album unfortunately will not stick with me. While the effects of the synths and the keyboards are enough to get through the album, as well as the smooth California sounds, the lack of substance leads the album to fall flat. Still, Kosmo offers a wide range of sounds that may appeal to fans of dream pop.

King Dawit considers himself the Psychedelic Cowboy. Raised on The Beatles, Queen, The Rolling Stones, and Crosby, Stills, Nash, & Young, you will never find Dawit listening to the same thing two days in a row, whether it be '70s progressive rock or late '60s Baroque pop. Dawit is also a Toronto-based writer, filmmaker, and music producer. Among his favourite writers are Hunter S. Thompson, Terry Southern and Lester Bangs.
RELATED ARTICLES
album reviewalbum reviews
10