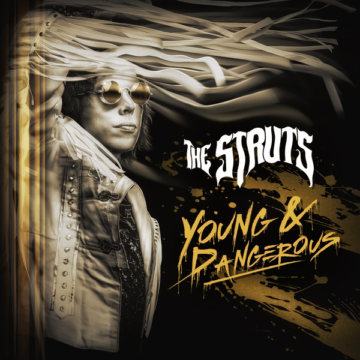 English-Canadian rock outfit, The Struts, have had an amazing year. While busy with their own headlining tour across North America and Europe to promote the release of their single, “Body Talks”, the band had the opportunity to open for none other than The Foo Fighters on their Concrete And Gold tour – which featured a killer stop at Toronto’s Rogers Centre. Now, to top off what has already been a huge year, while also setting them up for an even bigger 2019, The Struts have returned with Young & Dangerous, their second full-length album, and their first release since 2017’s Live And Unplugged.

Opening with their two lead singles, “Body Talks” and “Primadonna Like Me”, The Struts confidently step in Young & Dangerous with a stride that is equally as strong as it is cool. “Body Talks” features a slick verse driven by a gritty shuffle before exploding into a catchy as hell chorus while the latter, “Primadonna Like Me”, is a Queen-inspired rocker that very well may be even catchier – and pairs excellently with its Vegas-themed music video, complete with a cameo from none other than Alice Cooper.

As the album continues, The Struts prove that they are among some of the strongest new rock bands taking the scene by storm, but are also writing some of the catchiest tracks. Nearly every song on Young & Dangerous is fueled by tight grooves, crunchy guitars, and the infectious lyrics and powerful vocals from Luke Spiller amounting to an album’s worth of songs that are easy and fun to sing along to. The Queen influence becomes even more apparent when the band indulges in pop sensibilities on tracks like “Bulletproof Baby”, “Who Am I”, and the funky dirty rock of “I Do It So Well”, along with the largely acoustic ballad, “Somebody New”, however, “Tatler Magazine”, featuring a lush range of vocal harmonies set over a hard-rocking vibe, is perhaps the most influenced by Freddie Mercury and Brian May with Spiller’s energetic vocal performance and Adam Slack’s sleek guitar solo and tone. Naturally, with their strong and original songwriting voice, their ability to channel Queen only adds to the appeal of Young & Dangerous.

All in all, having found their sound early on, The Struts continue to develop as one of the most interesting new rock bands around. Young & Dangerous is a record that lives up to their acclaimed live performances – if you’ve seen them in concert, that alone says enough. Truly, there is no doubt that The Struts have taken classic rock, particularly that of the 1970s and ‘80s, and re-envisioned it for today in a manner that feels seamless, stylish, and highly entertaining.

A passion for music has always been a part of Gerrod’s life. As a young boy, he was raised on a steady diet of the music from The Chili Peppers, Aerosmith, The Stones, Prince, and others from his mum. Raised in the GTA, Gerrod continued to foster his love for music by attending a wide range of concerts and learning the drums. His unapologetic passion for music has no bounds and has spread to a wide variety of styles, whether it be the 90’s rock that sound tracked his teenage years, the jazz he studied in university, or his newfound love for hip-hop. He recently received his bachelors in music and education from York University and is passionate about writing and reviewing good (and less than good) music. Gerrod is also the drummer and songwriter for a Toronto based rock & roll band, One In The Chamber.
RELATED ARTICLES
album reviewalbum reviewsinterscope records
8.0