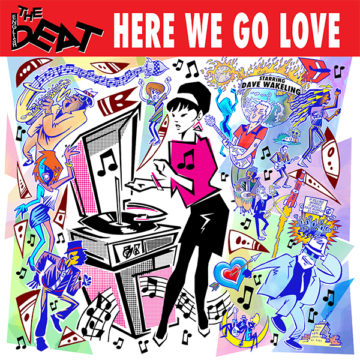 The Beat formed in 1978, and released their debut album in 1980, I Just Can’t Stop It. But the release of that album lead to some problems with their name in Australia and North America. It seems there was already a band named ‘The Beat’, so in North America, they became ‘The English Beat’, while in Australia they became ‘The British Beat’. For original member Dave Wakeling, who is now using the name, the solution was simple. Worldwide, they are now The English Beat. He also added Starring Dave Wakeling, so no one confuses his band with Ranking Roger’s band, ‘The New English Beat Featuring Ranking Roger’. Simply put, Dave Wakeling has returned, under the name The English Beat.

This is a good thing. I always felt that three albums were never near enough. Of course Wakeling (with Ranking Roger) went to international success with General Public after The (English) Beat disbanded in 1982. So it is nice to have a new English Beat album. Here We Go Love is also Wakeling’s first studio album since General Public’s 1995 final  album Rub It Together.

The English Beat have always been categorized as a ska band, and while ska has played a role in their music, The English Beat were always more, much more. Here You Go Love clearly demonstrates this point. Yes some of the songs fall into that category, but elsewhere Wakeling dips into his rock and roll influences, and at times pop. Listen to the beautiful and heartbreaking “Never Die”. The arrangements tug at your heartstrings, and Wakeling’s plaintive vocals are perfect.

But do not be fooled by the music, although at times it is toe tapping and pleasant, the lyrics reveal a different side. The album kicks off with the brilliant “How Can You Stand There?”. Wakeling asks “How can you stand there/When all around you is a lie?”. Thus the album is off, starting with politics, Wakeling moves into personal relationships, the state of the world and his, and your, place in it.

The English Beat always had a strong political side to them, and Wakeling has not lost his passion and compassion. He writes melodic music but buried in the songs are impressions on the world and the shape it is in. He is not shy sharing his view and he uses the English language much the same way poets express themselves in text. Listen to “If Killing Worked”. A straight ahead rock song with some thought provoking and well written lyrics. “If killing worked, it would have worked by now” as answer to the world’s ills. Add to this Wakeling’s strong vocal performance. His voice is strong and has never sounded better.

Here We Go Love is a great album, and it is wonderful to have Dave Wakeling and The English Beat back. His humour (yes there is humour on the album), observations and writing is better than ever. It is safe to say that The Beat were part of a movement, and today, that movement is needed more than ever. Kind of a hero’s return.

Born and raised in Whitby, Aaron discovered music through his love of The Beatles. This led to a career in radio, writing for various publications, and ultimately a radio show about The Beatles (Beatles Universe), which ran for over four years. When not immersed in music, Aaron enjoys spending time with the loves of his life -- his wife Andrea, and daughters Emily and Linda (all of whom have an intense love of music too).
RELATED ARTICLES
album reviewalbum reviewsdave wakeling
8.0