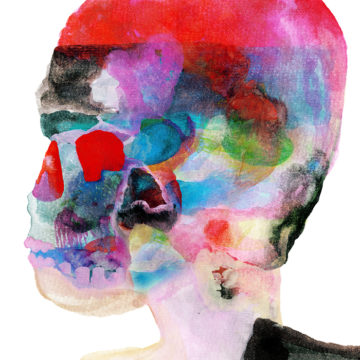 The distinct sounds of indie-rock heroes Spoon returns with one of their most inventive and confident pieces of work to date. The highly anticipated Hot Thoughts finally drops  following the ear-worm of a single “Can I Sit Next To You”, providing yet another solid addition to the indie heavy-weights already classic catalog. Hot Thoughts’ intricate production work crafts a heavily layered, trance-inducing atmosphere that captivates you from the get go. Brit Daniel hypnotizes the listener immediately with his recognizable scratchy voice creeping into the opening title track, as he chimes the titular phrase ‘hot thoughts are in my mind’.

Hot Thoughts follows the group’s critically acclaimed 2014 LP They Want My Soul, which was released after a four year hiatus. Once again proving their relevance and consistency Spoon sparked a new wave of fandom and anticipation for their next release; and Hot Thoughts surely does not disappoint. Still rooted in Brit Daniel’s expert songwriting and Spoons solid rock foundations, Hot Thoughts sounds pleasantly familiar while at the same time delving unabashedly into the experimental, creating a unique sonic atmosphere. The hypnotizing aesthetics which underlay each track can be credited in part to the production of Flaming Lips producer Dave Fridmann; a veteran at shaping polished rock songs with an experimental and artsy edge. Forming a base of electronic flourishes, swirling synths and dreamy Rhodes, every track reaches new heights with subtle yet complex arrangements.

A notable switch of gears on Hot Thoughts is the absence of acoustic guitar, the first in Spoon’s catalog to cut the instrument. We hear the full scope of what this album has to offer with it’s fully electric composition in the opening track. The title track “Hot Thoughts” kicks the album off starting with a lone synth swelling as a robotic drum beat enters along with Brit Daniels eerie harmonized vocals. Finally a killer guitar riff brings the whole song together into a full energy rock track. The track builds and breaks down throughout, showing the dynamic range Spoon can effortlessly feature within a single tune. The moody atmospheric rock continues with the following track, a standout on the album: ‘WhisperI ’ll listen to hear it”. Again beginning with a lone synth, the modulated electronic base builds a steady rhythm as this song uses all the groups elements to gradually build in intensity throughout the track. The song kicks into full gear about halfway through when it brings up the tempo a notch with a bare-bones drum beat booming along with piercing electronic noise-synths.

Another great track follows with the huge stomping groove of “Do I Have To Talk You Into It”. Still supported by a well-crafted mix of keys beneath the beat, but strongly focused on a simple drum line and bold melody. The group dives deepest into their experimental side with the track “Pink Up” a primarily instrumental number featuring intertwining percussive instruments and a marimba lead. Then right into the single “Can I Sit Next To You”, the best bet for a bona fide hit from this release, with a notably tight groove and a simple yet undeniably catchy melody.

Hot Thoughts continues with a dynamic track listing that truly keeps you engaged; from the melancholy ballad “I Ain’t The One”, to the upbeat sounds of “Tear It Down”. This release features a consistent collection of songs with just enough varying experimentation to boost each track’s composition and keep you guessing. Once again Spoon has proved their relevance and unwavering song-craft. It looks like we may have another hit on our hands.

Growing up in the dull suburbs of Southern Ontario, Elijah gravitated towards the city at a young age. With a healthy addiction to live music, and a constant itch for discovering his new favourite band, he finds himself happily submerged in Toronto's music scene. With his work appearing thus far in Sock Monkey Sound, and The Spill Magazine, he's going to keep this writing thing going for a while.
RELATED ARTICLES
album reviewsmatador recordsspoon
8.0