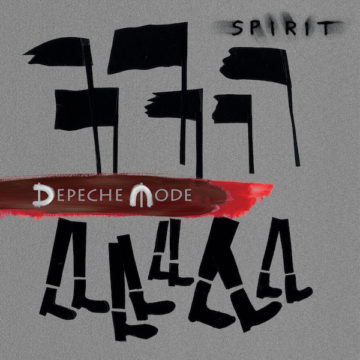 Spirit is Depeche Mode’s 14th studio album, and couldn’t have come at a better time. Opening with the pointedly political “Going Backwards,” frontman Dave Gahan laments ‘We’re goin’ backwards/turnin’ back our history.’ Sung over an electro beat emulating a march (a protest march?) the album begins with what feels like a passionate plea. In this Trump/Brexit time, there is little nuance to the songs on Spirit. The political bend is heavy handed, calling for listeners to find the “revolution” and letting us know that if we do not stand up, “you’re letting me down.” (“Where’s the Revolution”)

For those of us that grew up with a soundtrack of Depeche Mode songs playing in the background of most of our days, Spirit will at times, bring us back to the same feelings of our youth. However, the similarities to songs we loved like “People are People” and “Policy of Truth” are too few and far between for this to be a really great album. “Cover Me” is one of those redemptive songs that Depeche Mode are so good at, beginning slow and then giving us an optimistic climb in tempo.

Overall, Spirit is broody and melancholy. It’s a tough listen.  If you listen straight through and make it to the end, there’s a bit of hope inside you that the album will leave us WITH some hope. Unfortunately, all we got is Martin Gore reminding us that “We’re fucked,” on “Fail”, the final track.

I used to listen to Depeche Mode all the time, growing up. So much so, that now, some 20 years later, if you play a song for my dad and ask him who’s singing, his first answer will be “Depeche Mode!” because that’s the band name he remembers the most. I wanted to like this album more than I did. I really tried. The best music brings out emotions, or memories or just makes us feel. To be honest? All Spirit did is make me feel like turning it off.

Lucy Rendler-Kaplan is a native Chicagoan, recently returning home after 10 years in Los Angeles. Having worked in field marketing for the past 17 years, Lucy recently left corporate America to work as a consultant. When not running, Lucy can most often be found out with her dog, watching an NFL game, or listening to live local music. Passionate about writing, Lucy enjoys writing about music in lieu of playing it.
RELATED ARTICLES
album reviewscolumbia recordsdepeche mode
8.0