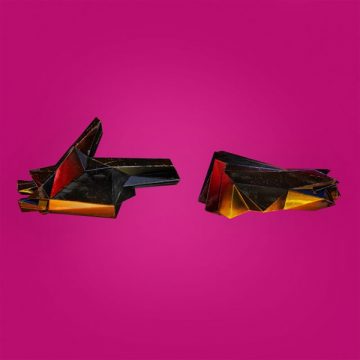 After promising their highly anticipated fourth album, RTJ4, would be available for free download in response to those in need due to the global pandemic and the recent racial protests in America, hip-hop duo Run The Jewels have dropped their latest record early, ahead of its original June 5 release date. With 11 songs and a series of featured artists including DJ Premier, Josh Homme, and, of course, Zach De La Rocha, Run The Jewels stays gold on the absolutely stellar RTJ4.

Opening with the lead single “Yankee And The Brave (ep. 4)”, Run The Jewels kicks things off with a vintage, ‘90s vibe that is stylistically nostalgic for the likes of Eminem and Wu-Tang Clan, with the fuzzy roar of an old television and the ‘60s style announcement “this week on Yankee And The Brave”. We return to the latest episode following our heroes, Killer Mike and El-P, as they unload an unrelenting sonic explosion of crisp beats best enjoyed at blaring volumes while the two rappers trade off verses that spare no one within their aim. Not quite gangstas, Run The Jewels continues to paint themselves as outlaws hell bent on hitting back against systematic social issues and, like the Robin Hood 2020 needs, supporting the voices and communities targeted and pushed aside by such policies. For all of the opening tracks forward momentum, “Ooh La La” takes a mellow step back. Featuring DJ and producer extraordinaire DJ Premier and Greg Nice, the track is an absolute throwback with its detuned piano sample and catchy hook. The contrast between the opening tracks is striking and sets the tone for what Run The Jewels tries to–and successfully achieves–on RTJ4.

As the record continues, Killer Mike and El-P move forward with a heavy sense of momentum that feels damn near unstoppable. “Out Of Sight” (featuring 2 Chainz) bounces hard and is propelled hard with some of Mike’s slickest of flows on the album while “holy calamafuck” rolls at an uneven, disjointed, and off beat pace inspired by Afro-Cuban rhythms until hitting the middle break, a total shift into modern hip-hop with a badass strut to it. Choosing a highlight among RTJ4 is a true challenge – the entire record is truly incredible, front to back – however, a special note must be made of “Ju$t” which features Pharrell Williams and Zach de la Rocha in his regular, reoccurring guest spot he’s made on each RTJ album since 2014. The track is equally as bombastic as it is melodic and hooky. “The Ground Below” also stands as yet another stand out track for its sheer aggression in – just like “Yankee And The Brave (ep. 4)” – both raps and beats and, lastly – and quite contrastingly – the dark, reflecting, and introspective “Pulling The Pin”, which features soul icon Mavis Staples and Josh Homme of Queens Of The Stone Age.

Taking the unflinching and abrasive aggression of 2014’s Run The Jewels 2 and the sophistication of 2016’s Run The Jewels 3, RTJ4 is a hip-hop masterpiece that truly advances Run The Jewels’ sound forward in a distinctive, exciting, and unique direction. The dynamic duo that is Killer Mike and El-P remains fierce and sharp as they usher an old-school hip hop vibe into the future with an album that already feels essential to the genre’s cannon and has a certain quality that already feels like a classic. Run The Jewels proves to be undeniable and timeless on RTJ4, a record that should break the band from cult favourites to hip hop heroes as they set the bar of the genre for the coming decade.

A passion for music has always been a part of Gerrod’s life. As a young boy, he was raised on a steady diet of the music from The Chili Peppers, Aerosmith, The Stones, Prince, and others from his mum. Raised in the GTA, Gerrod continued to foster his love for music by attending a wide range of concerts and learning the drums. His unapologetic passion for music has no bounds and has spread to a wide variety of styles, whether it be the 90’s rock that sound tracked his teenage years, the jazz he studied in university, or his newfound love for hip-hop. He recently received his bachelors in music and education from York University and is passionate about writing and reviewing good (and less than good) music. Gerrod is also the drummer and songwriter for a Toronto based rock & roll band, One In The Chamber.
RELATED ARTICLES
album reviewalbum reviewsbmg
8.0