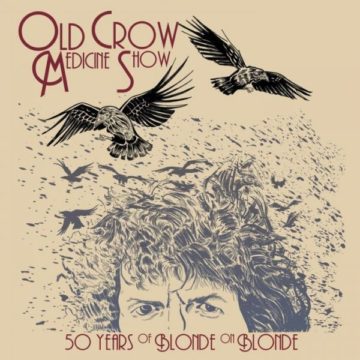 I love Old Crow Medicine Show, love them.  They have put out some of the finest country/roots album over the past decade.  And I love Bob Dylan, and like most people, recognize Dylan’s Blonde on Blonde as the classic that it is.  It is a stunning album, and one of the most influential albums of all time.  And I was intrigued when I read that Old Crow Medicine Show, in paying tribute to Dylan, was releasing a live recording of their take on the album.

So, why am I not crazy about this live album?

Old Crow Medicine Show have had a few changes since their last album (2014’s brilliant Remedy), which includes signing to Columbia Records (home of Bob Dylan)..  This is their first signing to a major label.  Also, members of the band have co written two songs with Dylan.  Their biggest hit “Wagon Wheel” (from 2004’s Old Crow Medicine Show)  and “Sweet Amarillo” from Remedy.  They have clearly been influenced by the legend.

The question bears repeating, why am I not crazy about this album?

The show was recorded live at The CMA Theatre in Nashville, Tennessee, in May of 2016.  As usual, their playing is first rate and the energy is present.  The problem is that they cover the songs very closely to the original.  When they cut loose and put on their own spin, such as their version of “Obviously 5 Believers”, they shine.  But sometimes they fall into the trap of not wanting to tinker with the classic material.  Given Dylan’s live performance and his habit of rearranging his own songs, I think Dylan would have appreciated the band taking some of the songs in different directions.

The band is very faithful to the original album, performing it in order.  They are tight, play beautifully and there is no doubt about their sincere love of the album and Dylan himself.  But, knowing Old Crow Medicine Show, I expected more from them.  I was excited at the thought of the putting their own spin on this classic work.  What happens, for me, is that as I am listening to this album I keep asking myself why not put on the original Dylan album.

The irony here is that Dylan has been issuing albums of cover versions for the past four years, but Dylan does not treat the music as nostalgic, but rather as contemporary.  Here is a band covering Dylan, and it is more nostalgic than new takes on the music.

Born and raised in Whitby, Aaron discovered music through his love of The Beatles. This led to a career in radio, writing for various publications, and ultimately a radio show about The Beatles (Beatles Universe), which ran for over four years. When not immersed in music, Aaron enjoys spending time with the loves of his life -- his wife Andrea, and daughters Emily and Linda (all of whom have an intense love of music too).
RELATED ARTICLES
album reviewsbob dylanold crow medicine show
8.0