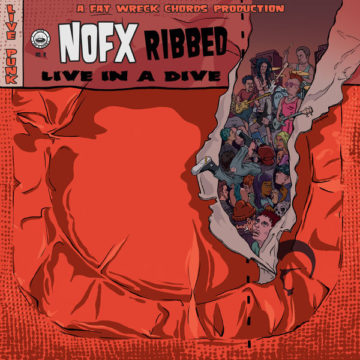 Seeing NOFX live is always surprising – breaking from the typical concert formula of playing hits interspersed with new singles, they take pleasure in shocking the audience with obscure or bizarre numbers. Their last live album, They’ve Actually Gotten Worse Live, certainly veered away from their relatively popular stuff with lesser-known tracks such as “Happy Birthday You’re Not Special” and “See Her Pee”.  Ribbed – Live in a Dive, however, is as predictable as they come, with NOFX solely playing the tracks off of their album Ribbed, with little changed other than Kody Templeton taking over on vocals for “I Don’t Want You Around” and some classic NOFX self-deprecation peppering the pauses between songs. The sixth installment in Fat Wreck Chords’ 17-year-old Live in a Dive series, Ribbed – Live in a Dive is admirably true to the original album, perhaps even to a fault – though Ribbed featured Steve Kidwiller on guitar, giving current NOFX guitarist El Hefe an opportunity to decorate the live album with his own musical style, Hefe left Kidwiller’s contributions alone. Despite this minor disappointment, the album provides what it promised to, giving listeners a cleaner, more polished version of Ribbed – perhaps NOFX’s most underappreciated album – complete with better production value, more agreeable vocals (Fat Mike’s voice was substantially less pleasant in 1991), and a steady soundtrack of band banter.

“I don’t know about you guys, but I’m sick of NOFX”, Fat Mike yells after a few songs, “Get a beer, get a drink, this song’s terrible”. Despite the self-effacing humour, Ribbed is electric and boisterous, filled with catchy riffs and sharp witticisms. The opening of “Green Corn” is particularly poignant:

Other lines are deliciously clever; as Fat Mike points out in Live in a Dive, TV series Californication stole the line “We might not go down in history / But we’ll go down on your sister” from “The Moron Brothers”. While Ribbed – Live in a Dive admittedly doesn’t give devoted NOFX fans much new material to get excited about, it is still a fierce rendition of a rocking album and wildly entertaining to boot.

Isabel is an English major at the University of Toronto, and spends most of her time reading books, listening to punk rock music, and writing for anyone and everyone willing to read it. Raised in Toronto, her somewhat eclectic music taste has been shaped by a healthy mixture of mosh pits and Mirvish musicals. She thinks live music is the highest form of entertainment.
RELATED ARTICLES
album reviewalbum reviewsfat wreck chords
8.0