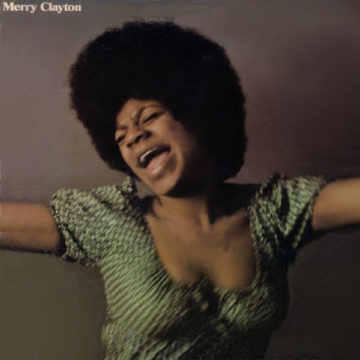 Strange is the fate of backup singers. Many have extraordinary talents, but rarely get anything beyond a mention in the liner notes, and rarely even get a chance to have a solo recording.

The case of Merry Clayton, one of the backup singers whose name does get a mention and who did get a chance to record solo (actually, up to seven albums) is even stranger. She became known for her extraordinary backup vocals on the Rolling Stones classic ”Gimme Shelter”. Those vocals were so legendary, that they actually became a source for a true rock urban legend, which Chicago Journalist Eric Spitznagel retells in his brilliant book Old Records Never Die: One Man’s Quest for His Vinyl and His Past.

Still, that didn’t help Merry’s solo recording career, since the four recorded for Ode Records between 1970 and 1975, of which this self-titled one is the second released originally in 1971, never made a big splash, the ones that followed even less so.

It seemed that fate might be changing after she was featured in the Oscar winning documentary 20 Feet from Stardom (2014), only to be involved in a car accident a few months after its release, after which both of her legs had to be amputated.

Beside all this, her Ode albums, and this self-titled one in particular deserve to be rereleased on their musical merits alone. With all the makings of a “Best of the Seventies Southern Soul” album , it showcases all the nuances of Clayton’s extraordinary vocals, which do justice to all the covers, particularly Neil Young’s “Southern Man”, Leon Russel’s “A Song for You” and her originals. It is no wonder, since the arrangements were done by Carole King and Billy Preston, with the production from Ode owner Lou Adler.

Formerly a lot of things, including a journalist and a translator, currently a freelance writer living in The Netherlands.
RELATED ARTICLES
album reviewalbum reviewsreal gone music
8.0