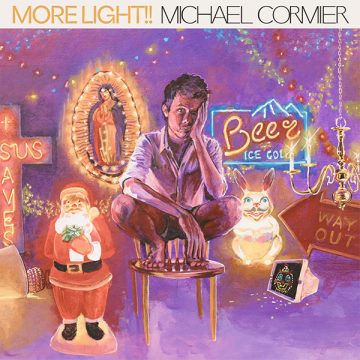 How do you survive in a music world as an artist these days? Unless you are a big name (and even then, it could be a problem), you have to take on a few musical roles, and then, that might not be enough either. You just might ask Philadelphia-based artist Michael Cormier about that.

He’s a drummer in Friendship, writes songs for Hour, co-runs indie label Dear Life Records, and he adds being a bread baker to boot. And all that didn’t prevent him from coming up with an excellent (second) solo album in More Light!!

Actually, it is one of the better lo-fi (without the lo), bedroom pop, or whatever you want to call it since Sufjan Stevens decided he wants do dabble with electronics.

Where does the undeniable charm of Cormier’s music lie? Most probably in his penchant for some intricate chord structures, obvious ability to take on a few instruments and some hushed, melodious vocals. Is that all?

Oh, and he is able to come up with some quite literate lyrics that tackle almost anything from very intimate to concerns we all share. “Last Hurrah” starts out like your ‘standard’ singer/songwriter fare, and then ads some intricate arrangement touches that bring it up to the level of best modern baroque pop. But then, every track here comes up with something that makes you perk up your ears. Oh, and enjoy!