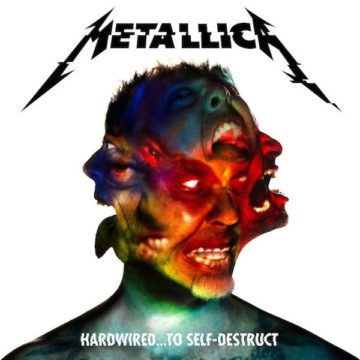 The wait is over! Hardwired…To Self-Destruct is here. Since the release of the EP Beyond Magnetic in 2011, Metallica fans have been eagerly waiting for another full-length album from the legendary Hard Rockers. And they won’t be disappointed.

Since its release, Hardwired…To Self-Destruct has been met with immense praise. Ranked number 36 on Rolling Stone’s “50 Best Albums of 2016,” the album has also managed to top the music charts in many countries and achieved platinum in Canada.

So what does it sound like? Well, there are the typical face-melting riffs and thunderous drums. There are also lengthy instrumental intros and doom-laden lyrics. It is not all heavy Rock either; there is a lot of variance in sound and tempos between songs. “Murder One,” “Here Comes Revenge,” and “Dream No More” feature softer intros whose lush melodies flow like a lullaby. But make no mistake; much like “Enter Sandman,” there is that hint of restraint just below the surface of the beautiful melodies. This complexity is perhaps one of the most alluring aspects of Metallica’s music.

And while the singles “Hardwired,” “Moth Into Flame,” and “Atlas, Rise!” set the bar for the album, they are only a taste of the intensity and brilliance on Hardwired…To Self-Destruct. Perhaps the most impressive aspect of the album is the social commentary that seems to surface in the lyrics. While it may or may not have been intentional, listeners will definitely resonate with “Hardwired”’s punchy chorus: “We’re so fucked / Shit outta luck / Hardwired to self-destruct.” The relevance of the song in relation to current world events couldn’t have been better timed.

Overall, Metallica fans will love Hardwired…To Self-Destruct. Casual fans who have only ever listened to Metallica’s well-known hits may find the harshness of this album hard to swallow. But the solace found in the softer tracks may be an attractive element for the hesitant music lover who has yet to delve into the world of Heavy Metal.

Music has always been a big part of Samantha’s life. Whether it was singing with a choir, reading music and playing instruments, or staying up well into the wee morning hours just to listen to the international music program on the radio, for Samantha music was as essential as breathing. One day, Samantha noticed that writing, her other obsession, always seemed to flow alongside music, and the two elements of Samantha’s life co-mingled for years. While at university, Samantha discovered that her passions could be put to use, and she embarked on the path of a music journalist. To date she has written many music reviews, news posts, and interviews and so far her work has appeared in The Voice Magazine, The Scene Magazine, and The Spill Magazine, as well as on her own website.
RELATED ARTICLES
album reviewshardwired...to self-destructmetallica
7.0