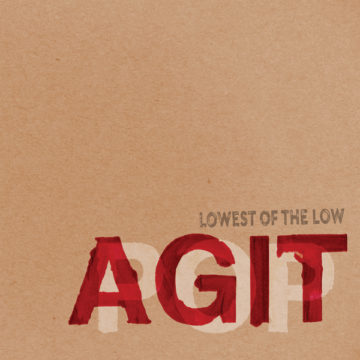 Lowest Of The Low introduce their sixth album, Agitpop, their first with Warner Music Canada since signing with Warner in 2018.

1991’s immeasurable, independently produced and released, Shakespeare My Butt… has been a cornerstone of Canadian music and the band’s best received work. From there, the band released 1994’s underrated Hallucigenia and then took a much-needed hiatus, incurred mostly from burnout. Lowest Of The Low reunited in 2000 for a string of shows which resulted in 2001’s double album, Nothing Short Of A Bullet, which consisted of a live CD and a CD of three new songs. The much anticipated 2004’s Sordid Fiction was released, followed by 2017’s impressive and catchy Do the Right Now.

Lyrically, this purposeful 14-track, 48-minute album, contains a decidedly political theme. While politics can be a somewhat depressing subject nowadays, Hawkins injects his lyrics with hope, unity, and a call to living in the now. The energy is contagious, making this brilliant album a striking, singable, and most of all optimistic offering about affecting change for the better.

Produced by Grammy-award winner David Bottrill (Tool, Muse, Peter Gabriel, Smashing Pumpkins), Agitpop is rockcentric, but also contains danceable Latin percussion beats, horns, keyboards and some epic harmonica. Earmarks of a spaghetti-western appear in the first single, The Barricade, which was released on May 1 as the album’s first single.

Hawkins not only sounds refreshed and ready-to-go on Agitpop, he’s also brimming with a rosy outlook for the future. His vocals haven’t sounded better and energized. The remainder of the band perform their musicianship with great utility, including nicely rounded harmonies which give the album extra layers to enjoy.

We spoke to Hawkins recently where he gave insight into the origins of some of the sounds on Agitpop. “Popular Front, the band before the Lowest Of The Low (which included Hawkins, Alexander and former member Stephen Stanley), was a seven-piece band and we had a full-time Latin percussionist, and horns and all of this kind of stuff. There was lots of two-tone and world-beat stuff. We kind of are coming full-circle with some of that and that might be the stuff we experiment with on the next one. As you can tell, I’m super pumped to just keep going.”

There are many standouts from Agitpop including the eighth track, Night Of A Thousand Guns, which contains a steady Latin drum beat and a passionate harmonica. Hawkins’ lyrics:

“This jacket’s straight/
This shallow grave/
When there’s two lives lost for every one life saved/
It’s like a life sentence more than a life/
A billion souls on the edge of a knife”.

The sixth song, F-Noise (Rebel Radio), is a melodic look back on the emotional continuation of life, which harkens to Hawkins and Alexander’s ‘80s band Social Insecurity. As well, it includes a memorable, nicely placed instrumental guitar solo.

Previously, the band had been skeptical of collaborating with large record companies, such as Warner Music Canada. However, it’s demonstrated in Agitpop to have been a very successful move for Lowest Of The Low. Agitpop ranks right up there with Shakespeare My Butt… which says much of the effort and passion put into this album by all involved. Hawkins spoke to that in our recent interview.

“I just feel that I really have access to that vibe still and I’m trying to take advantage of it while it’s here, because I’m not positive that I’ll always have it, that’s where I am right now. When I’m done making music I’m like “More music! Let’s go see some!” or I’ll write some, I still have energy for it.”

Agitpop will be released on double-gate-fold double-vinyl, CD format, and on music streaming services. Visit lowestofthelow.com for more information about the new album. Lowest Of The Low will be performing the following dates with plans for a cross-Canada tour to be announced, in support of Agitpop.

John Graham is a Vancouver-area resident who typically spends most days admiring music of all genres. Top musical moments include surviving the SARS fest in Toronto, meeting Gord Downie after a show and having him call his friend to wish him a happy birthday, running into and hugging Sarah McLaughlin at a Whitehorse concert and, finally, awkwardly bumping into the ever polite Hayden at the Vogue Theatre in Vancouver after his set.
RELATED ARTICLES
agitpopalbum reviewalbum reviews

by John Graham on May 28, 2019
THE HIGHS AND THE LOWS WITH LOWEST OF THE LOW AN IN-DEPTH CONVERSATION WITH RON HAWKINS: PART TWO An anomaly, that’s what [...]