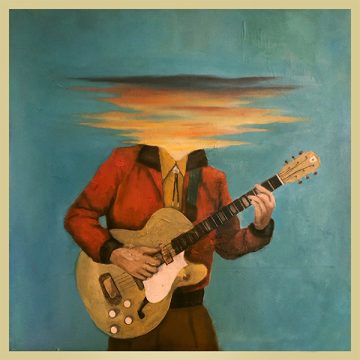 After Lord Huron somehow managed to find new life on its 2018 record Vide Noir — a 1970s-inspired psychedelic journey through LA at dusk — it was anyone’s guess where the band would take its fourth record. Would it continue this newfound alternative rock style or reacquaint itself with its folk roots? The answer is simultaneously ‘both’ and ‘neither’.

On Long Lost, Ben Schneider and his crew don’t set out on an epic adventure. In fact, they stick to their home base. The album intends to imagine the fictional history of their recording studio — aptly named Whispering Pines — and emulates their conjured-up predecessors. It’s essentially a clever excuse for the band to progress forward while chronologically moving backward. The result is an incredibly dynamic, instrumentally-driven, mixed bag.

Album opener “Mine Forever” starts off strong. A bubbly, infectious rhythm marries the Beach Boys with Spaghetti Westerns, achieving a duet between Schneider’s impassioned vocals and a soaring violin. The newfound orchestral elements take centre stage throughout, including on the title-track, which effectively uses strings to mask folk-rock as if it were a number in The Sound of Music. The short-lived, but memorable, “At Sea” dreamily blends Schneider’s echoed words with cleverly distorted cello and lap steel guitar, recalling the unmistakable sounds of Gilligan’s Island. Following this, “What Do It Mean?” marks Huron’s highest achievement — a cacophony of steel drums, horns and electrics that, together, refuse to bear a resemblance to any specific era or genre. This instrument calamity acts in synchronized step with the existential lyrics, asking “What does it mean if it all means nothing?” And when the orchestra isn’t the protagonist, the trusty electric guitar gets its time to shine. Imitations of Johnny Cash and Elvis come to fruition on “Love Me Like You Used To” and “Not Dead Yet”, the album’s two radio-friendly hits, which both toe the line between camp and creativity. The former is likely the most conventional pop song Lord Huron has ever made, marked by its gleeful guitar hook.

The real obstacle with Long Lost, however, is that Schneider’s vocals are subdued in some crucial moments. While the production doesn’t necessarily undermine the vocals, it certainly isn’t concerned with making them coherent. On “Drops In The Lake”, a dark crescendo dubiously devours the chorus’ lyrics. On “Where Did The Time Go”, a reminder of high school slow dance numbers from (let’s say) 1974, Schneider mumbles through his sentimental verse. This both works and doesn’t for Lord Huron. While their arrangements are certainly what sets them apart from other bands, tracks like “Twenty Long Years” show that Huron can be at its most effective with singalong, heartfelt lyrics. Here, Schneider thoughtfully chimes “I destroyed my health, searching for myself/but there ain’t nothing there to find”. Most disappointingly, unfortunately, is the massive, 14-min closer, “Time’s Blur”. While an interesting experiment — taking a rolling pin to the record’s other songs and elongating their sound waves — the track feels remarkably empty. There’s an attempt, here, to tie together the themes of the record, but it feels more like a Tron score B-side rather than a creative endeavour which adequately closes off such a colourful record.

Fluctuating between creative evocations of bygone tunes and finely-tuned instrumental hooks, Long Lost is less constrained by its thematics than previous records, yet feels like Lord Huron’s busiest album as a result. It counts for something that Schneider & co. seem to have had more fun this time around, managing to keep their original charm without compromising their ambitions.

Robert Defina is an avid critic both on paper and in person. He spends more time writing album reviews than he does worrying about his future. He hopes that this sort of procrastination never grows old.
RELATED ARTICLES
album reviewalbum reviewslong lost
7.0