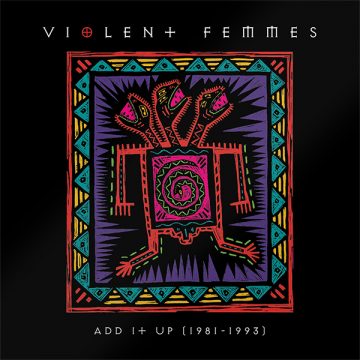 It is now 40 years on since Gordon Gano and his crew brought us their souped-up, brilliant musical vision of post-punk/new wave/whatever on mostly acoustic instruments. Some put this under a misnomer of punk folk.

Actually, it is mostly music that defies categorization. Labels? How about Captain Beefheart without the gruff voice? Or Jonathan Richman with touches of jazz? Americana special? Maybe, just simply, Violent Femmes.

So, more than some other musical anniversaries, this one needs to be celebrated. Forward come Craft Recordings with this special reissue of their out of print ‘best of’ Add It Up (1981-1993). And a true celebration it is. It is a 23-track compilation that for starters includes true classics like “Blister in the Sun,” “American Music,” and “Gone Daddy Gone.” The selection covers the band’s key five albums. But we also get live recordings, demos, B-sides, interstitial voice recordings as well as a few rarities to boot.

You do get to choose from the digital version or vinyl version (both 23 tracks), which itself comes in three versions. The ‘standard’ black vinyl, the webstore Blister Red Marble version (500 copies only) and Aqua retail store version.

Not much more to say about the music? Not needed. It is an absolute classic in every respect.

Formerly a lot of things, including a journalist and a translator, currently a freelance writer living in The Netherlands.
RELATED ARTICLES
album reviewalbum reviewscraft recordings
9.0