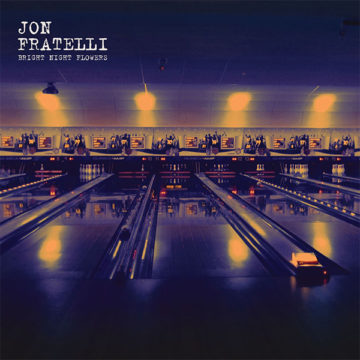 Jon Fratelli takes things down a notch in the best way possible on his new solo album, Bright Night Flowers. With moody, mellowed-out guitar, pixie-like strings, and Fratelli’s quiet, underrated vocals, this album adds a new dimension to his work with The Fratellis and demonstrates growth in his songwriting.

“Bright Night Flowers”, the title track, feels a bit like a fairytale, with the lyrics “I never tried to be on their side” ringing true throughout. Though sad and melancholic, there is still a sense of hopefulness, as if light is just around the corner. That light emerges on the next song, “After a While”, a peaceful track full of piano and strings that still carries some of the previous gravity, but feels slightly more triumphant. Fratelli once again demonstrates his storytelling abilities, this time recounting the emotions of saying goodbye.

While the indie pop of The Fratellis is largely absent on Bright Night Flowers, there are some similarities to the group’s last album, most apparent on “Evangeline”, a ballad full of slide guitar and spurned love.

Written last summer in Scotland, there is a light easiness to the album that comes across in the tranquil, silky piano and even-tempered melodies. Despite the subjects of hardship and heartbreak that Fratelli tackles, the attitude of sad acceptance demonstrates his ability to achieve emotional depth in his work.  An excellent addition to his collection of timeless tracks and meticulously-crafted sounds, Bright Night Flowers is a must-hear album for 2019.

SPILL FEATURE: I NEVER WISH TO WRITE THE PERFECT SONG
A CONVERSATION WITH JON FRATELLI

Gabrielle Bossy is a lover of all things music, writing and charcuterie boards. Gabrielle has a particular passion for music of the 1960s and the hippie movement in Toronto’s Yorkville district. Gabrielle runs her own music website, The Hippie Historian, where she reviews concerts, interviews musicians and writes about music history that spans the ages.
RELATED ARTICLES
album reviewalbum reviewsbright night flowers
9.0