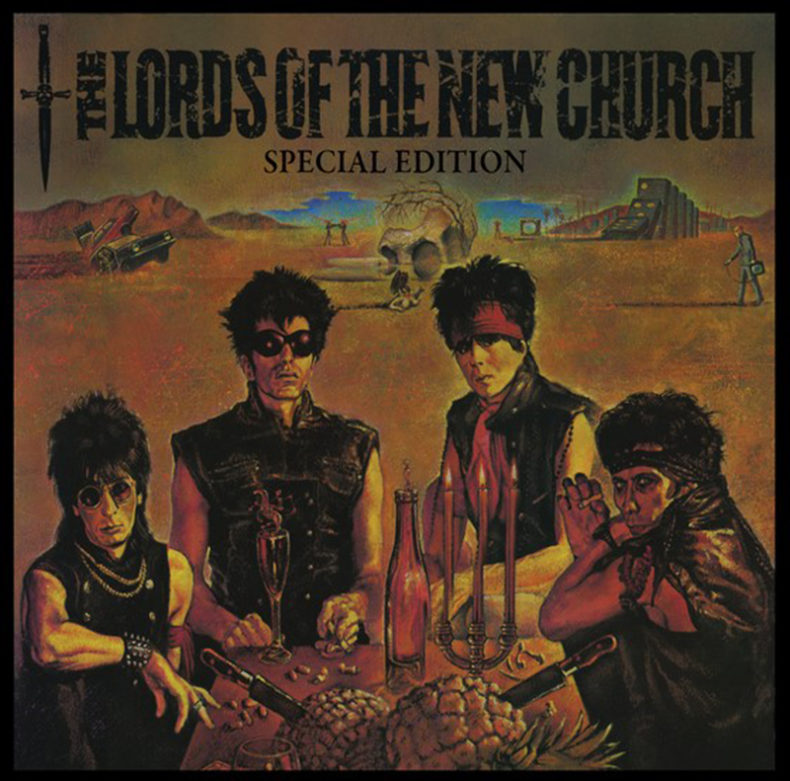 The 1982 self-titled debut by post-punk supergroup the Lords of the New Church will be unearthed for a new generation of fans by Blixa Sounds Records on July 20, 2018.

This special edition two-CD set titled Lords of the New Church: Special Edition features all 10 tracks from the band’s 1982 self-titled debut, originally released by I.R.S. Records in the U.S., plus the B-side bonus tracks “Girls Girls Girls” and “Young Don’t Cry,” as well as the single version of the band’s modern rock hit, “Open Your Eyes.” The album is augmented by a 13-track 1982 live set — culled from the band’s own vault — featuring the Lords in all their glory at My Father’s Place, the legendary Long Island, N.Y. nightclub. Aside from live versions of the songs on their debut, the second disc includes the Lords’ reading of the Allen Toussaint classic “Fortune Teller.” The set includes a 12-page, full-color booklet, featuring photos of the band, replicas of gig posters and new liners noted by music journalist Craig Rosen, who interviewed the band in 1983 for his college newspaper.

The Lords of the New Church were formed in 1980 by Stiv Bator and Brian James, both survivors of the punk wars of the late ’70s. James was a founding member and chief songwriter of U.K. punks the Damned, responsible for such classics as “New Rose” and “Neat Neat Neat.” Bator was the mouthpiece of young, loud and snotty Cleveland punks the Dead Boys, known for such classics as “Sonic Reducer” and “Caught With the Meat in Your Mouth.” It was record mogul Miles Copeland, founder of the I.R.S. Records label and older brother of Police drummer Stewart, who suggested the Bator-James alliance.

Initially, the Lords were a punk supergroup of sorts, with its first rhythm section consisting of ex-Generation X bassist Tony James and two-time Clash drummer Terry Chimes. Though they didn’t last, their song “Russian Roulette” stayed, and made the band’s debut album. Bassist Dave Tregunna of Sham 69 was eventually recruited with Damned drummer Rat Scabies joining the fold for a single 1980 gig billed as the Dead Damned Sham Band. By the time Scabies was replaced by Nick Turner, formerly of London-based neo-surf combo the Barracudas, the band was rechristened the Lords of the New Church.

Recorded at Farmyard Studios in the U.K. and produced by the Lords, the band’s 10-track 1982 debut is an unholy mix of punk, glam, garage rock and goth, giving those too young to catch the Damned and the Dead Boys in their prime the opportunity to experience the legends of Bator and James in real time.

Delivered at the beginning of the Reagan-Thatcher years, Bator’s lyrics perfectly caught the paranoia of the time, observing, “They threaten our lives with nuclear war” in the opening salvo “New Church.” He takes it a step further in the band’s biggest hit and album standout “Open Your Eyes.” Over a galloping punky reggae rhythm provided by James et al., Bator sings, “Video games train the kids for war / Army chic in high-fashion stores,” later adding “nuclear politicians’ picture show / the acting’s lousy but the blind don’t know.” Those lyrics were timely in ’82, and sadly they’re still relevant today; only the puppetheads in charge have changed.

Elsewhere, the Lords served up the defiantly politically incorrect “Eat Your Heart Out,” aimed at a “rich bitch” Stiv wants to “shut up and sit down,” a killer cover of the Balloon Farm nugget “Question of Temperature,” and other raging originals, including the tribal stomp of “Portobello,” the big beat psych-pop of “Livin’ on Livin’,” and the eve-of-destruction rocker “Holy War.”

While the band was touring to support the album in March 1983, an aspiring college journalist caught up with the Lords prior to a gig at Perkins Palace in Pasadena, California. What he witnessed was not rock ’n’ roll excess, but rather a group of seasoned professionals working hard to break through. Their day consisted of a TV appearance, interviews, soundcheck, a quick trip back to the hotel, and then the gig. Bator was wisecracking and rail thin; James, more soft-spoken and serious. “We’re four geezers who got together because we got along with each other,” James noted. Bator, at the time, was down on punk, which had been co-opted by violent skinheads, and was seeking to offer fans an alternative. “It’s all just a repeating of clichés and slogans of the past,” he said. “It’s become a fashion instead of a movement of passion like it was.”

While the Lords went on to record two other studio albums, their self-titled debut remains their finest hour (actually, a quick-hit 34 minutes). Bator died in 1990 after being hit by a car in Paris. According to legend, his girlfriend snorted some of his ashes and sprinkled the rest on the grave of Jim Morrison

Stiv may be gone, but it’s not too late for you to worship at the altar of the Lords and join the New Church. Shut up and sit down, and give it a listen.